Pratt’s Community Partnerships: Highlights from the Records of the Pratt Center

In June 2021, the Pratt Institute Archives was awarded a Documentary Heritage Program grant from the New York State Archives to process the records of the Pratt Center for Community Development. The goal of the grant was to make the records available to anyone with an interest in social justice and community based activism in New York City (and beyond). I joined the Archives in September 2021 to work on this project during my final year in Pratt’s Library and Information Science program. My focus throughout the program has been on archives so I was excited to tackle such a large and important collection. 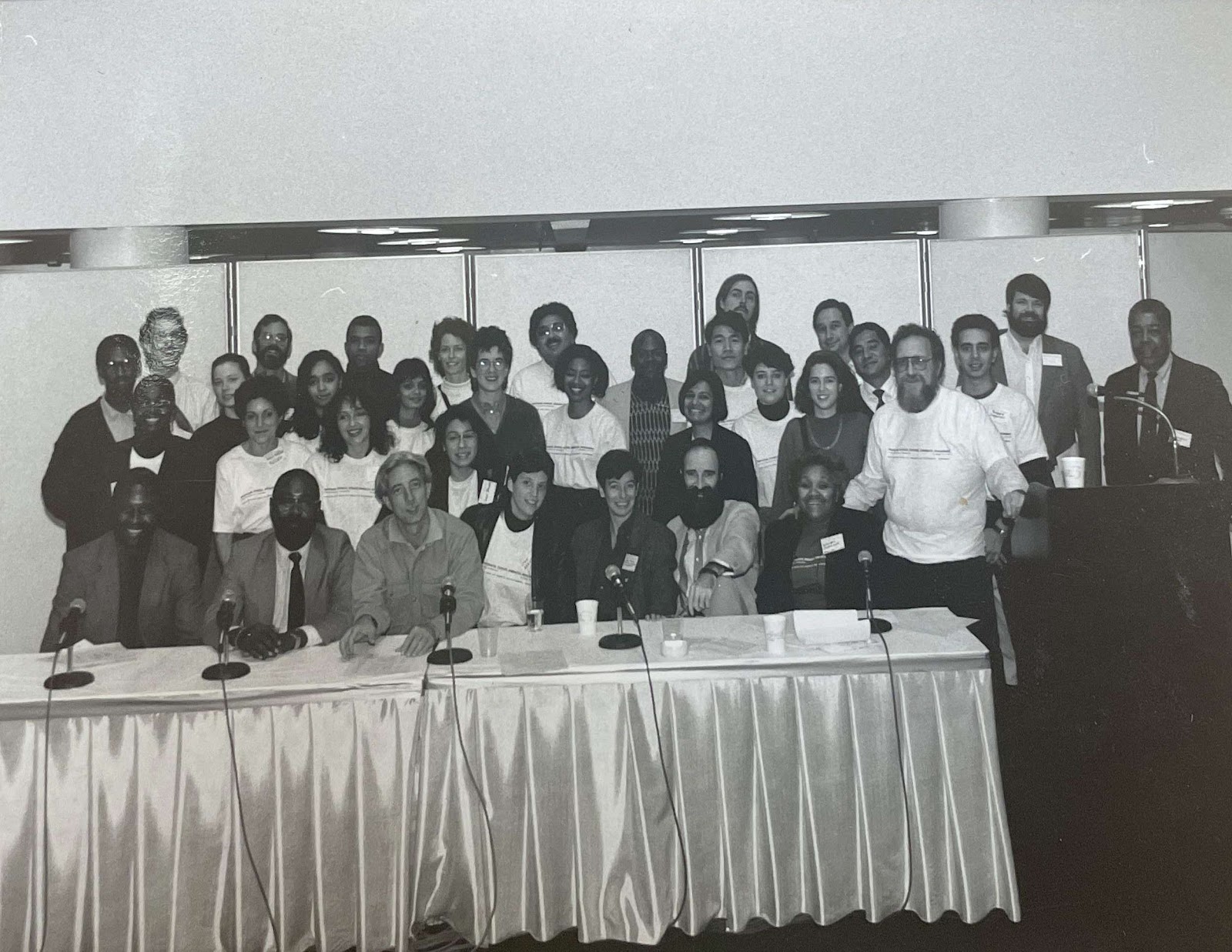 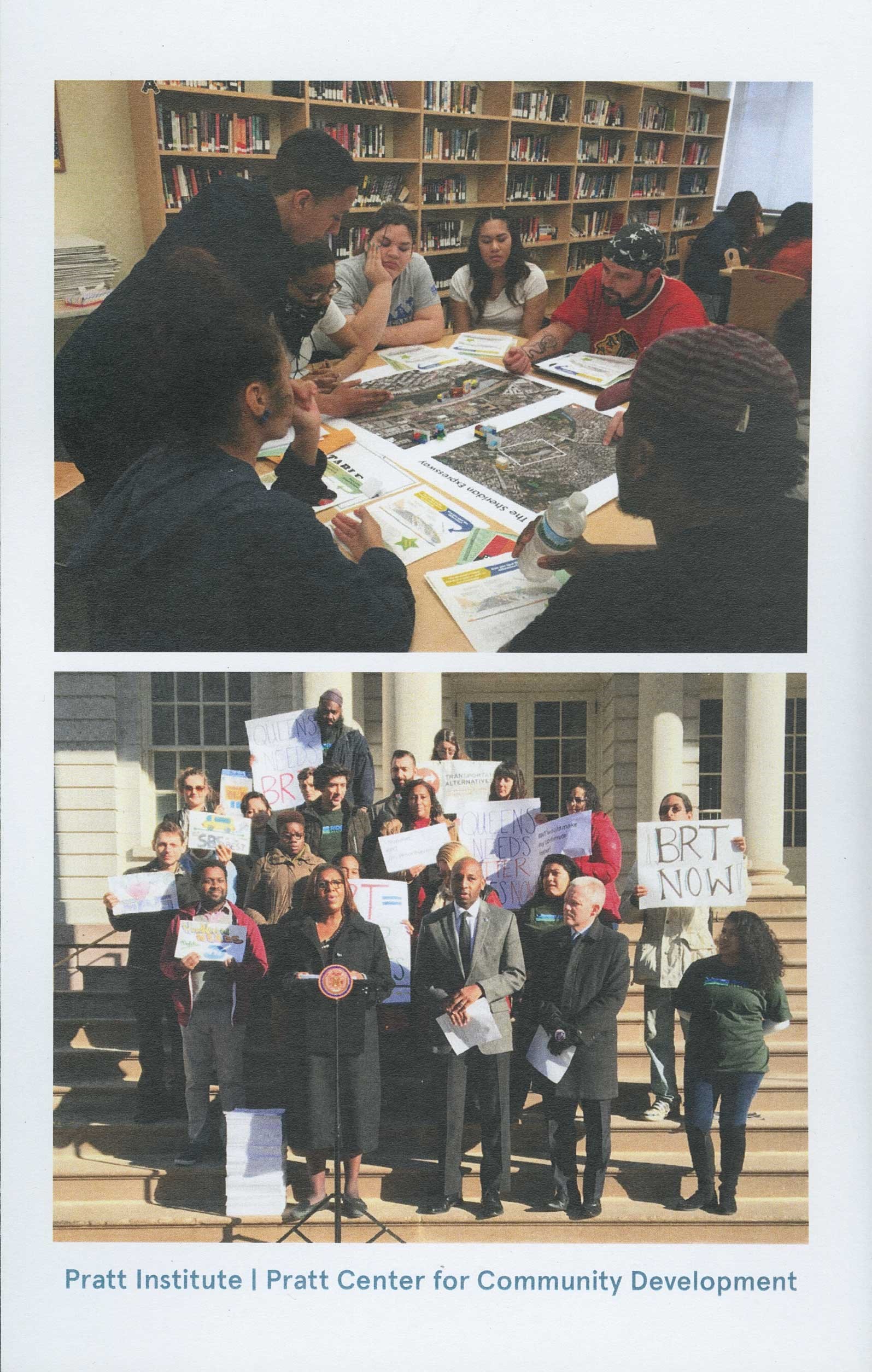 Front of a flyer advertising the Pratt Center for Community Development.

Since its founding and through to the present, the Pratt Center has continually supported community development in and around New York City. The current mission of the Pratt Center incorporates concerns such as environmental justice, manufacturing, and transportation, and the Pratt Center supports programming in those and other areas for communities as geographically diverse as Cypress Hills, Flushing, and the South Bronx, while remaining active in communities it has served historically, such as Bedford-Stuyvestant. The bulk of this collection covers the last 20 years of the Pratt Center’s work, with material dating predominantly from 2002 to 2020. Notable efforts the Pratt Center has made in the past 20 years include a partnership with the South Bronx Riverfront Waterfront Alliance to mitigate the environmental  impacts of the Sheridan expressway and studies of manufacturing industries in the Brooklyn Navy Yard. In Bedford-Stuyvesant, the Pratt Center took on a major effort to retrofit residential homes and, city-wide, produced important policy critiques of the city’s displacement evaluation toolkit. By documenting these initiatives and partnerships, many of which are ongoing, the collection presents a clear trajectory from the beginning of the community development movement to present-day implementations of technical assistance, policy analysis, and community education.

The initial accession of Pratt Center records consisted of 60.80 linear feet of material, including papers, photographs, and architectural drawings and plans. To process the collection, we needed to develop a plan for its organization, describe its contents up to the folder level, weed duplicate and out-of-scope materials, rehouse all of the material in acid-free archival folders and boxes, and create an online record for researchers to access information about the collection and request an appointment to view the records. One of the major challenges of processing a collection is getting to a place of “intellectual control.” Think of intellectual control as knowing the general contents of each folder or grouping of folders, what order it was originally in relative to other folders, and generally what people, places, topics, and times are covered in the collection. Having intellectual control over the collection allows us to write descriptive finding aids and keep materials safe and findable while the collection is being processed. 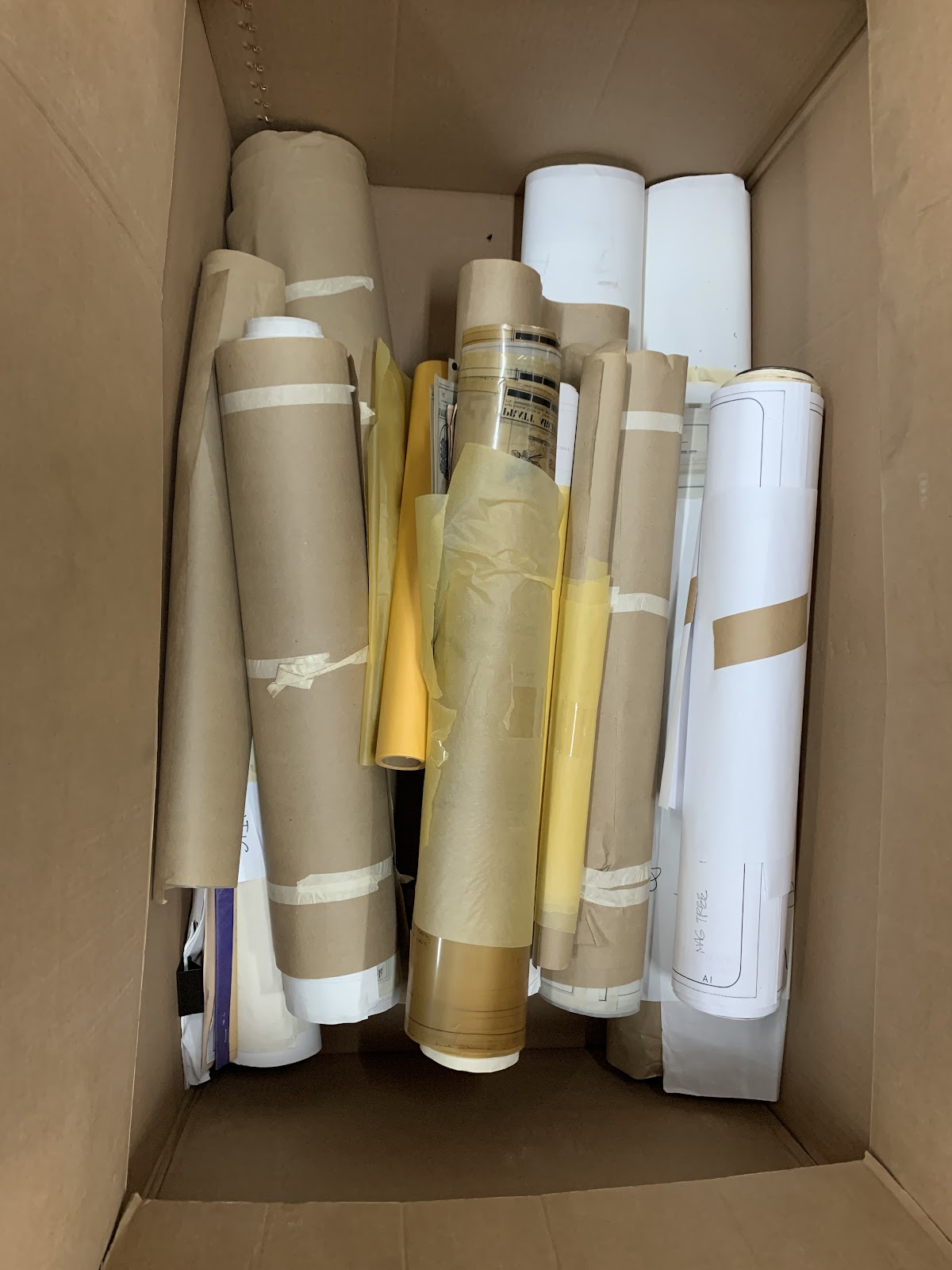 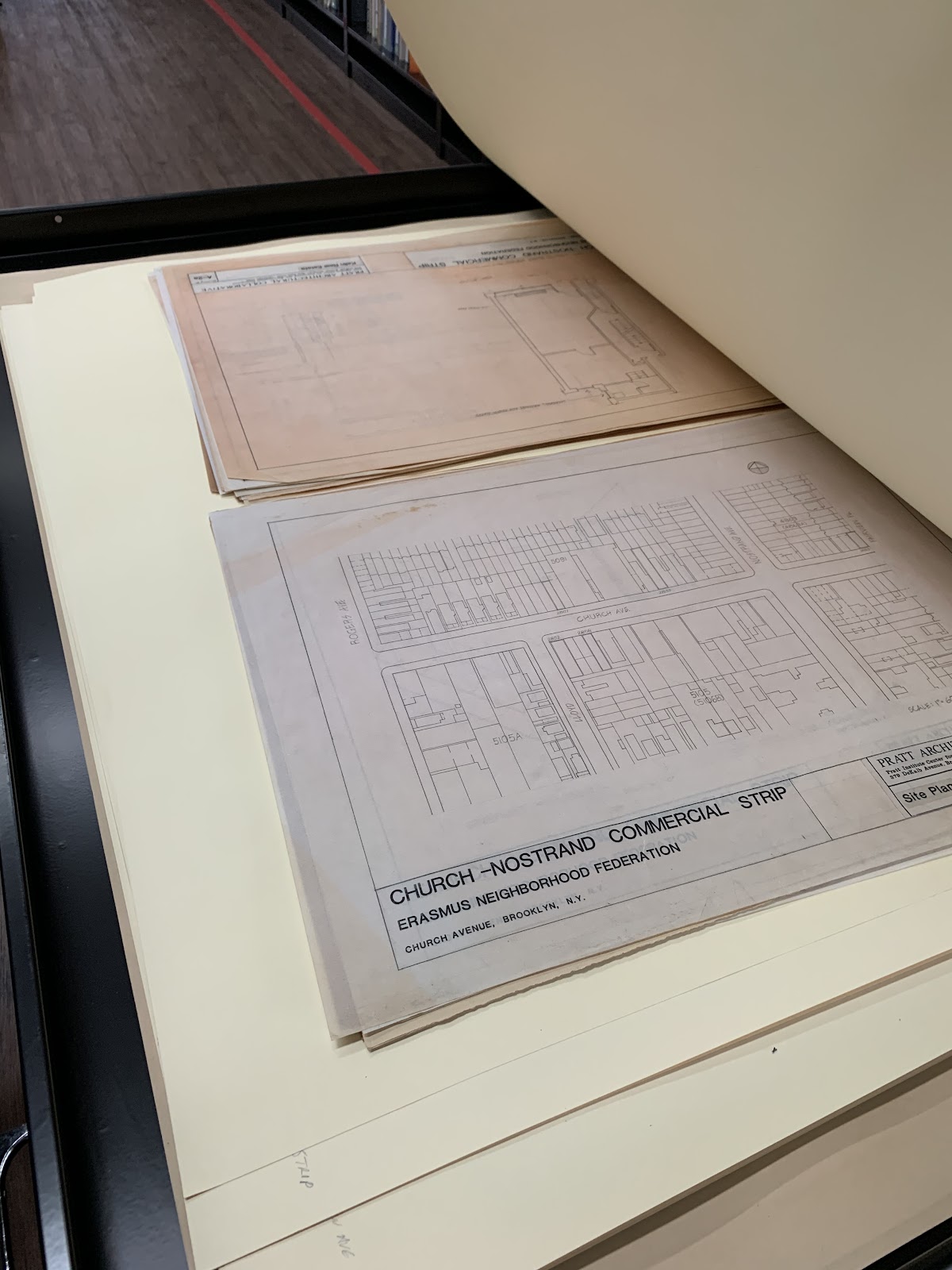 To achieve the level of intellectual control we wanted, we needed an inventory of all the material in the collection. This meant writing down the title and location of every folder in the collection, as well as the dates the folder covered. This process also included assigning or editing folder titles for accuracy and accessibility. When a folder was titled with an acronym or was unclear for some other reason, we gave it a new title; otherwise, we kept the original title whenever possible. For instance a folder titled with the acronym GOLES would be renamed “Good Old Lower East Side (G.O.L.E.S.)” in order to balance preserving the original information with clarity for researchers. Learning and translating the many acronyms used by community development organizations in New York was one of the biggest challenges to becoming familiar with this collection. 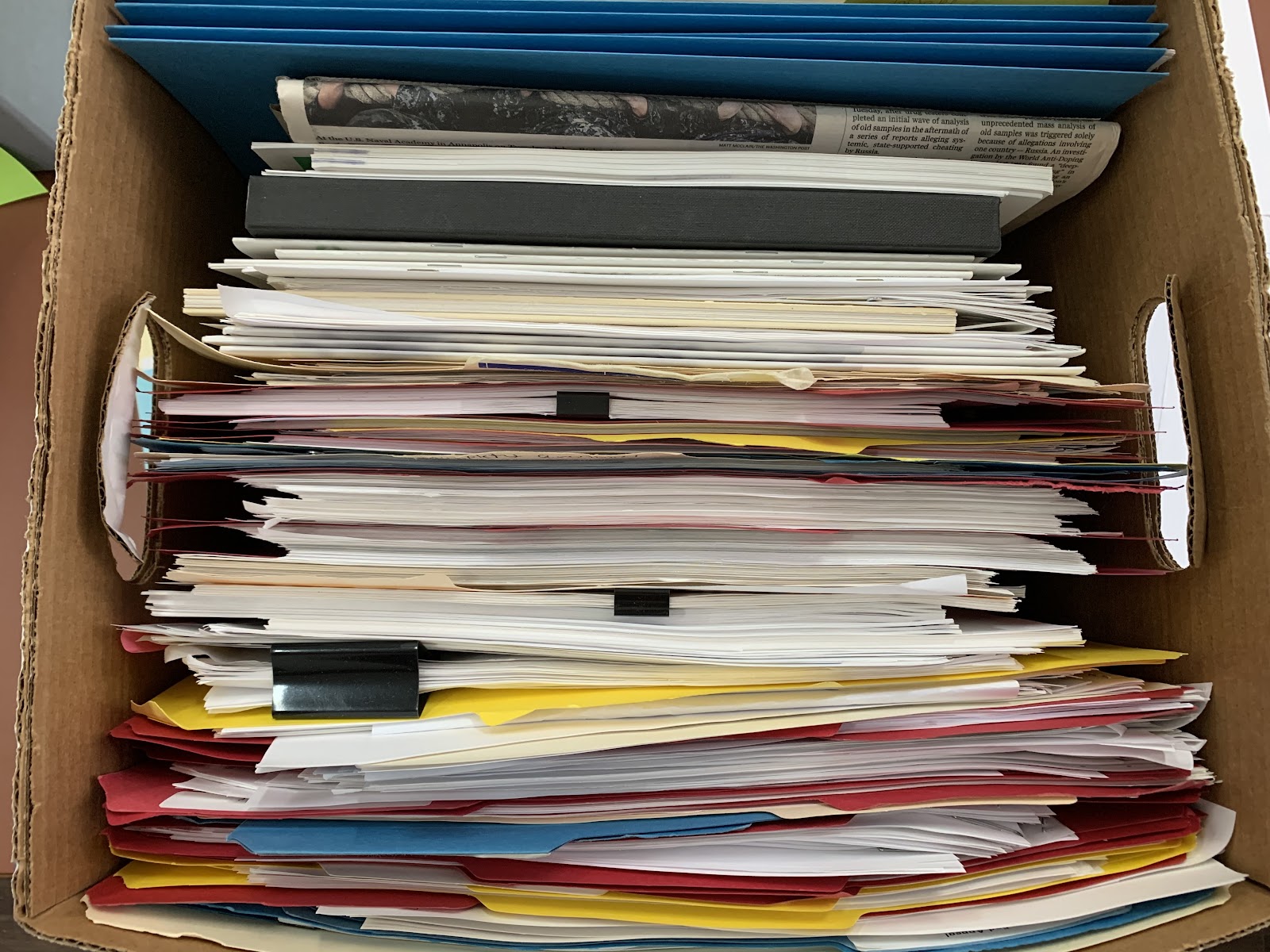 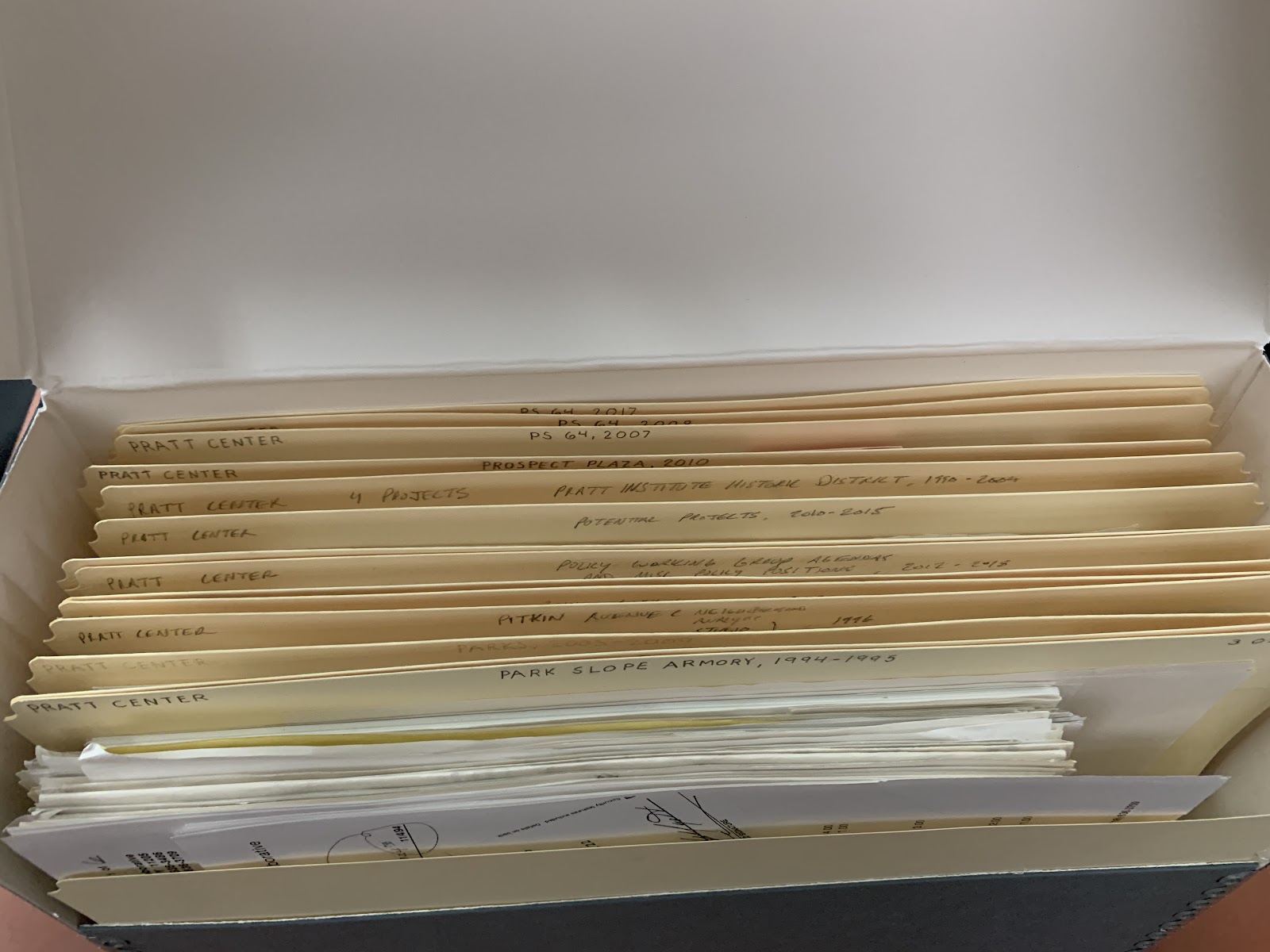 Armed with a much better understanding of the collection, I started to divide the folders into groupings known as series. A series brings together related records in the same location in the finding aid. This highlights their shared provenance (the same department or group of people produced the records) and their shared context (these records were found together and cover the same topic).

Now that I had achieved some intellectual control over the collection and had rehoused the papers into archival folders, it was time to finalize the location of each folder. I moved the contents from banker’s boxes into archival-quality document boxes. As I went, I tracked the new box number and folder number for each folder. During this time I also rehoused rolled plans, photographs and slides into specialty boxes. At the end of the process, the physical arrangement of the records was complete and the folder titles were ready to be uploaded into ArchivesSpace, the information management platform used by the Archives. After we removed duplicate and unrelated material, the final collection wound up being 42 linear feet. 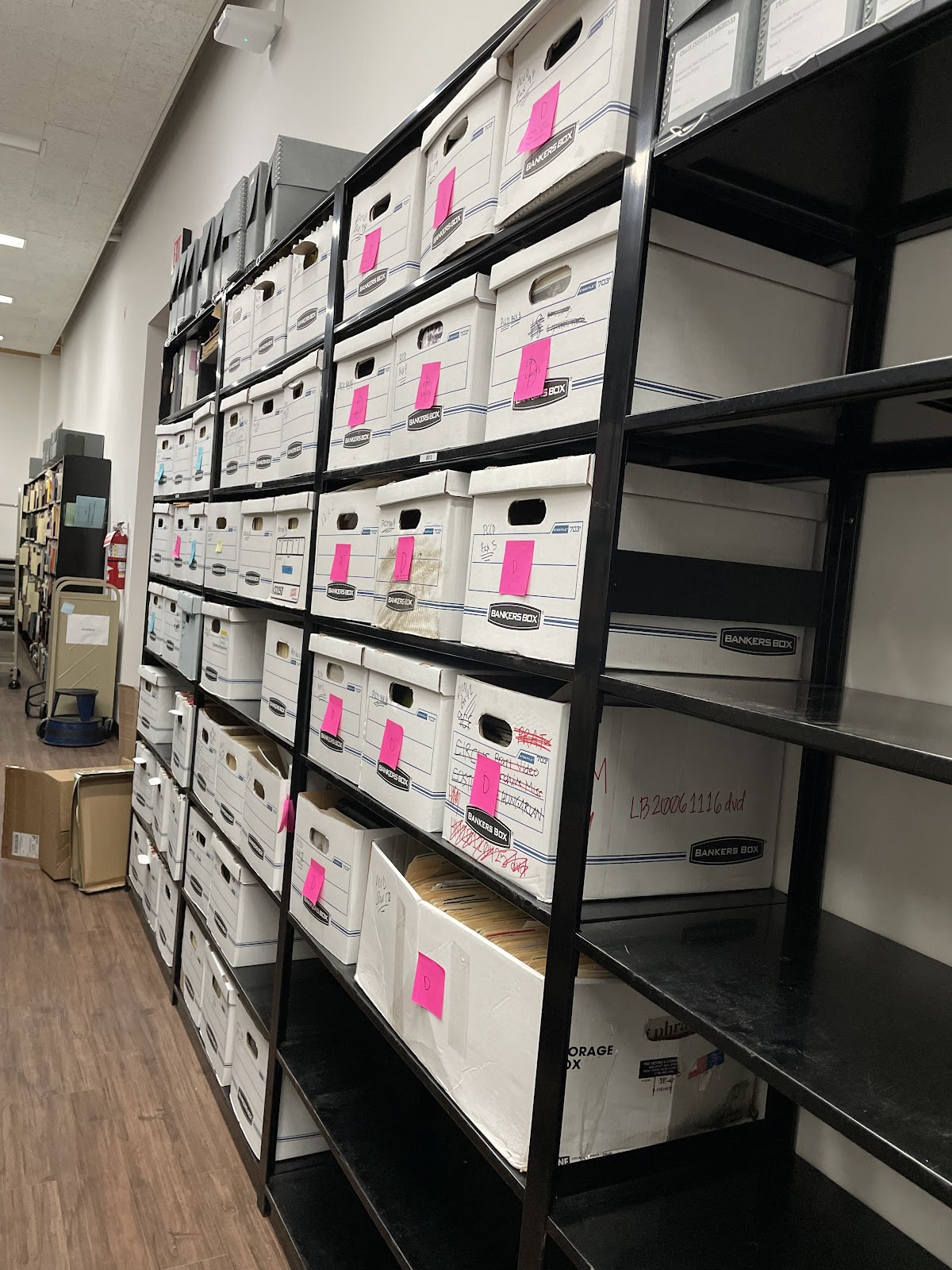 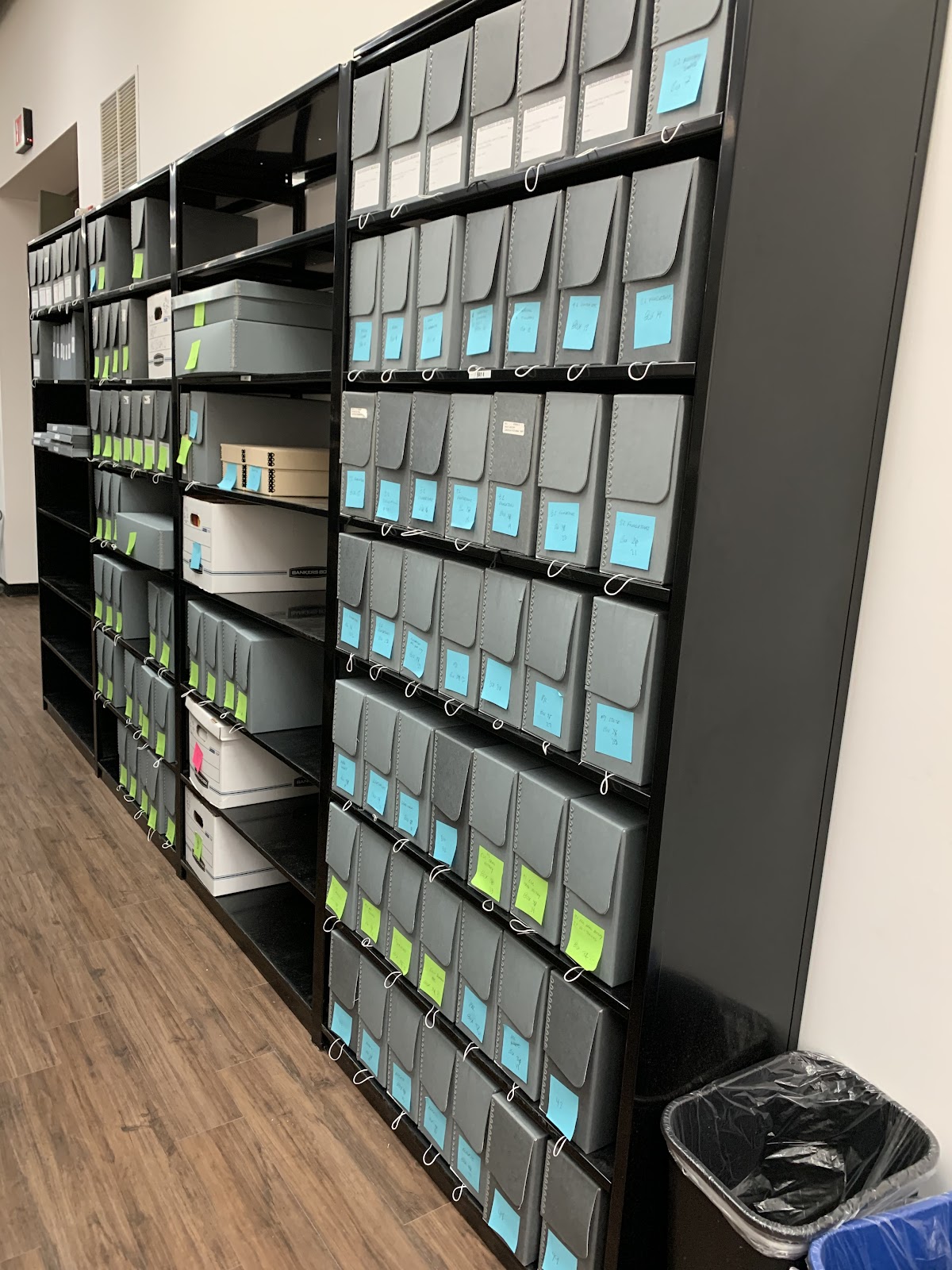 Left: Records of the Pratt Center housed in banker’s boxes prior to processing. Right: Fully rehoused collection. The last step will be to label each box.

The ultimate goal of processing this collection was to make it available to researchers through a finding aid, a document that provides contextual information about the collection: how we acquired it and who created the records, how it is organized and why we chose to organize it that way, and a list of all the folders (which have helpful, descriptive titles) in the collection. Writing the finding aid has been one of the most rewarding parts of working on the collection because it has allowed me to use all the knowledge I have gained over the past year to make the materials accessible to someone encountering them for the first time.

As someone interested in community development specifically and New York City more generally, I learned a lot about the recent history of New York as I processed this collection and will leave the project with a much richer understanding of the key challenges facing communities in the city today. One of the exciting things about working with materials that document the Pratt Center’s work through 2020 is that there is no gap between the historical record and the present day – what happens next is what’s on the news today! Archival processing does not involve reading every page in the collection, but organizing the collection did allow me to understand the broad strokes of the Pratt Center’s work and, by extension, the landscape of community development in New York City. Below are some highlights from the Records of the Pratt Center for Community Development.

The Community Development Corporations (CDC) Oral History Project was the first phase of the Pratt Center’s Outreach and Education Campaign. Funded by the Ford Foundation and completed in 1995, the CDC Oral History Project interviewed early leaders and participants in the community development. Based on these interviews, the Pratt Center produced a one-hour documentary, Building Hope, and several case studies. 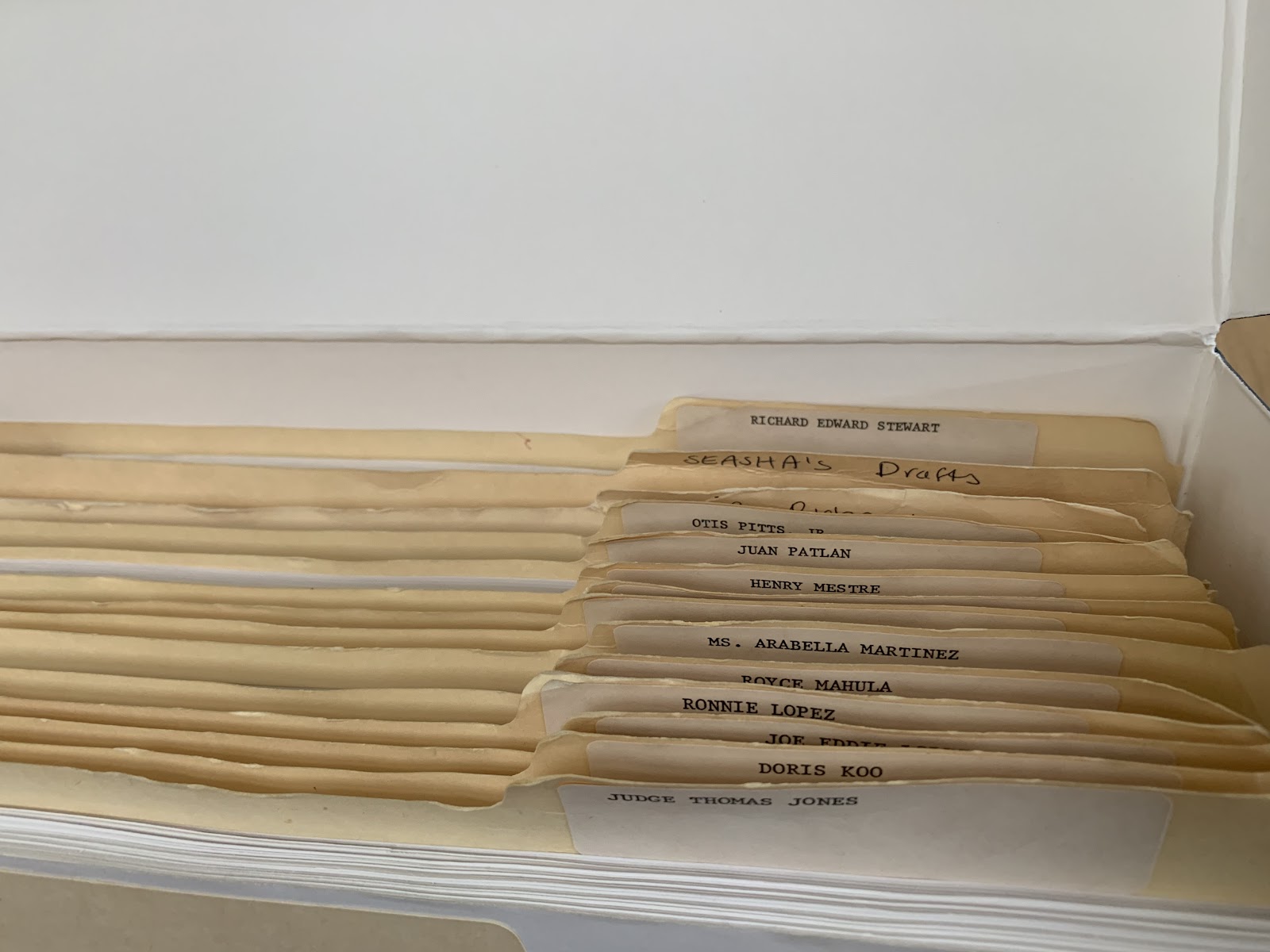 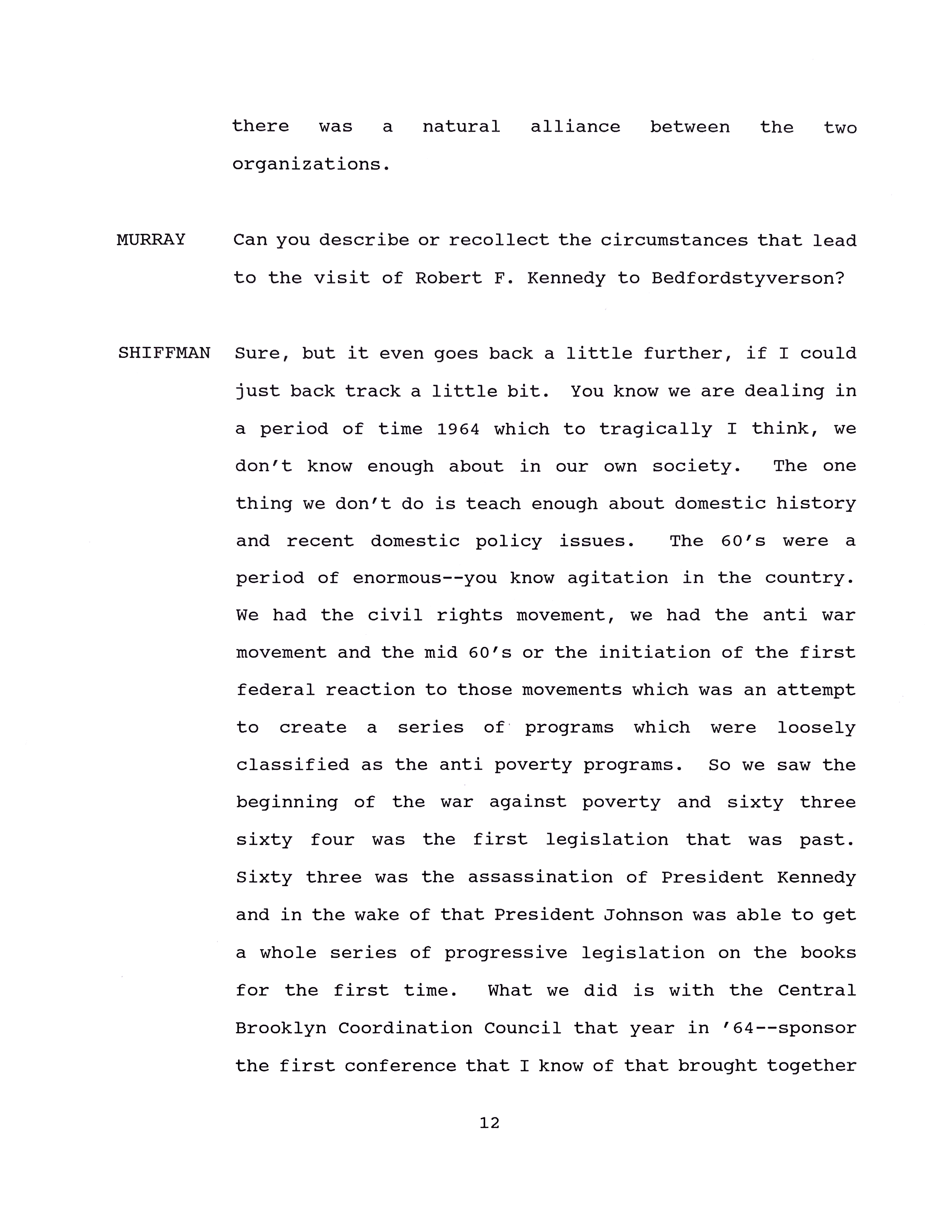 Left: A view into one of the boxes of the CDC Oral History Project Transcripts. Right: A page in Ron Shiffman’s transcript, where he begins to describe Robert F. Kennedy’s visit to Bedford Stuyvesant and the eventual founding of the Bedford Stuyvesant Restoration Corporation. 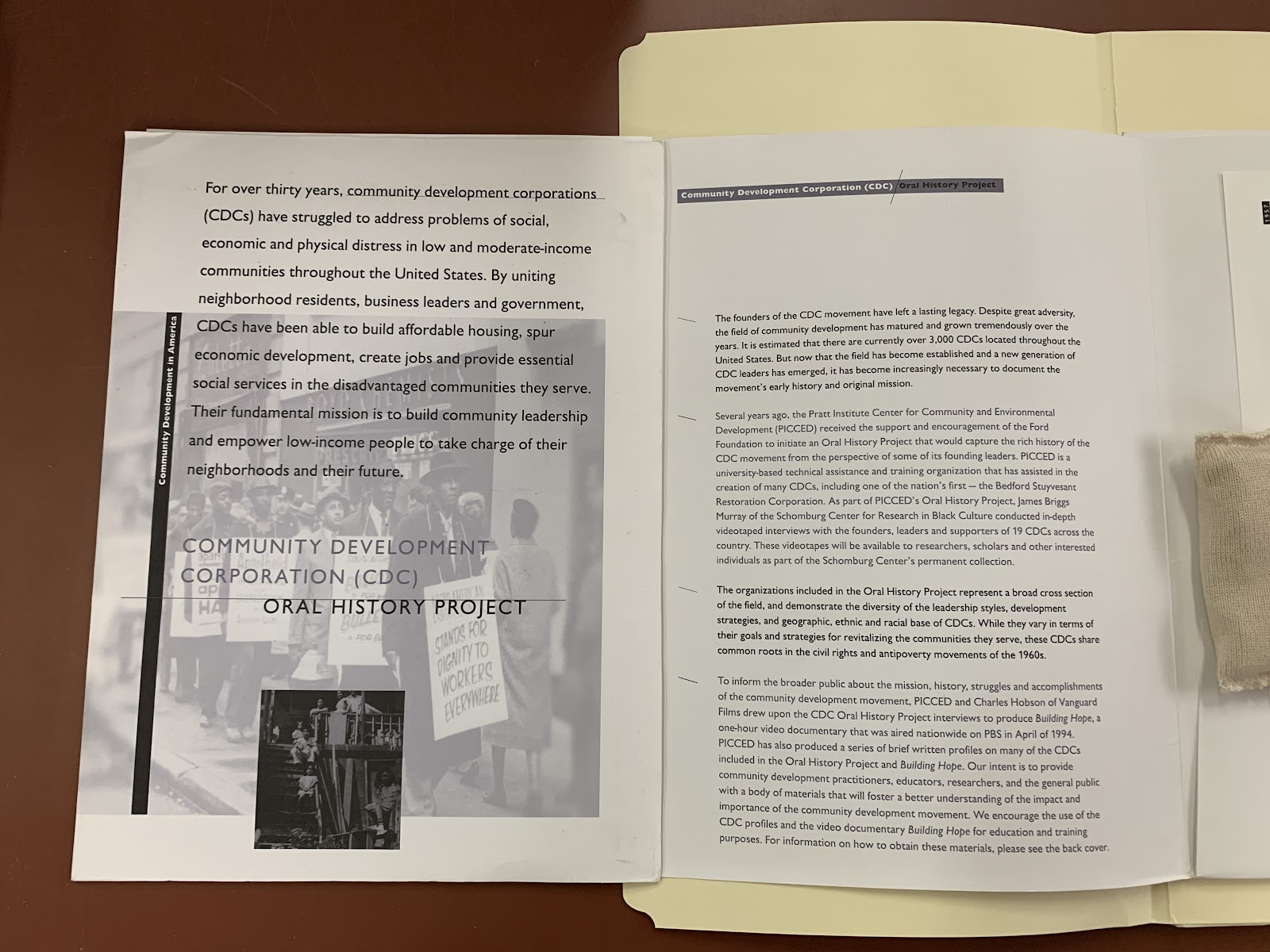 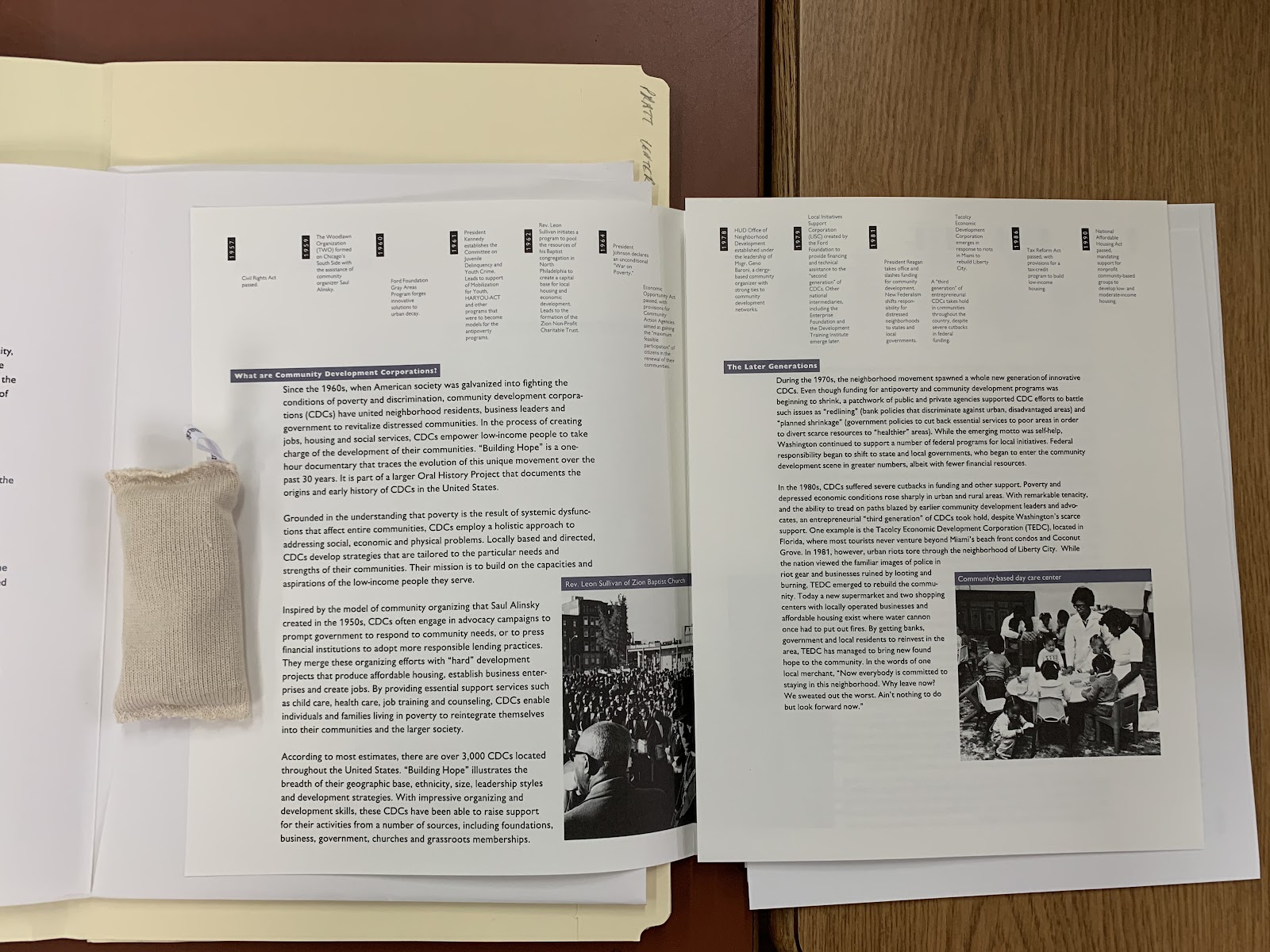 One of the richest features of the collection is the subseries on reports, which highlights research, analysis, and advocacy conducted by the Pratt Center from its founding to its current work. The reports cover an array of topics, such as child care and city wide development, the earliest report in the collection as well as more recent projects like One City / One Future, a larger scale effort to propose a blueprint for city wide development. In addition to the report, the collection contains several folders of material related to the planning, analysis, and partnerships that made the report possible. The wide range of reports in the collection speaks to the breadth of the Pratt Center’s work since its founding. 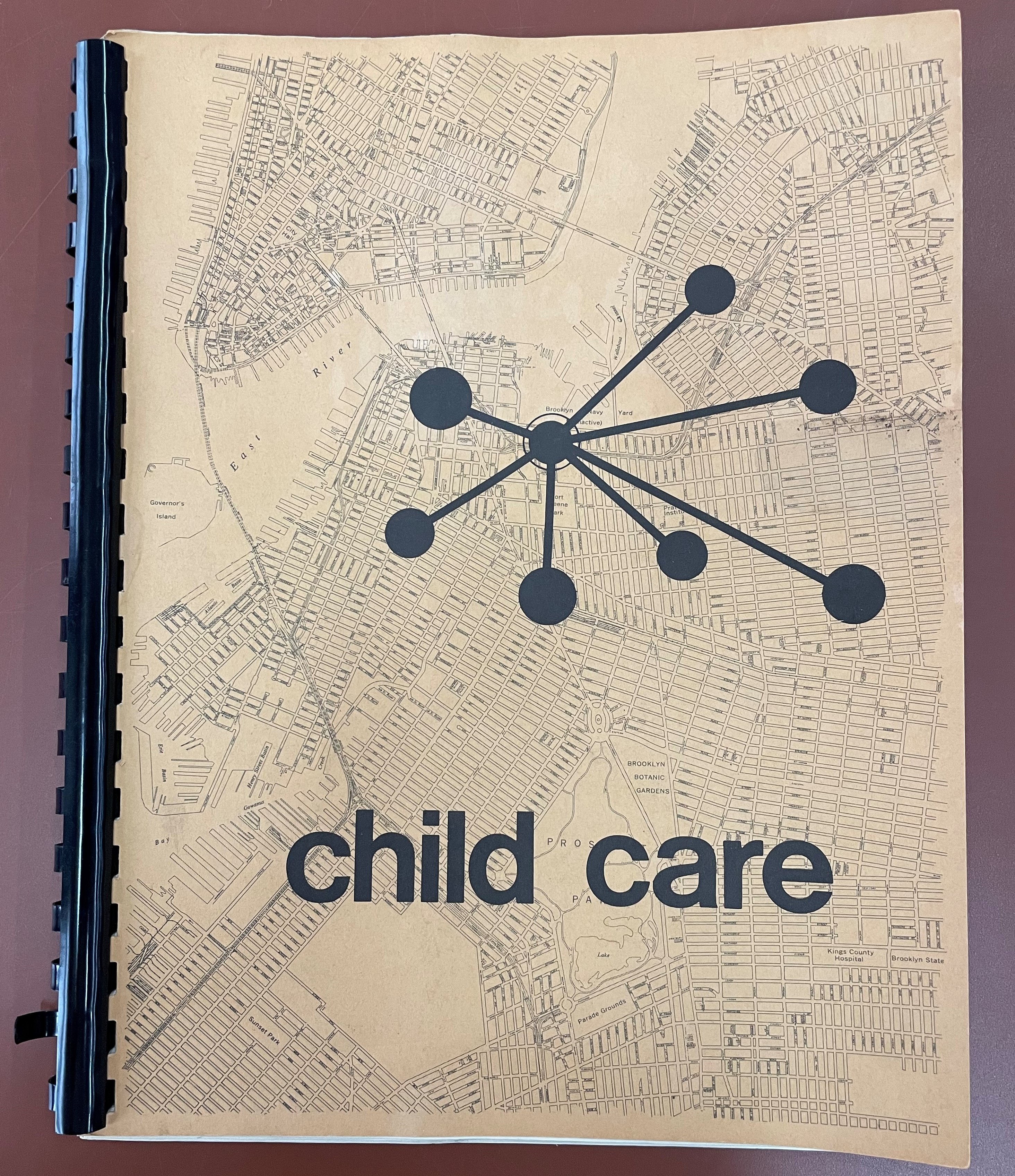 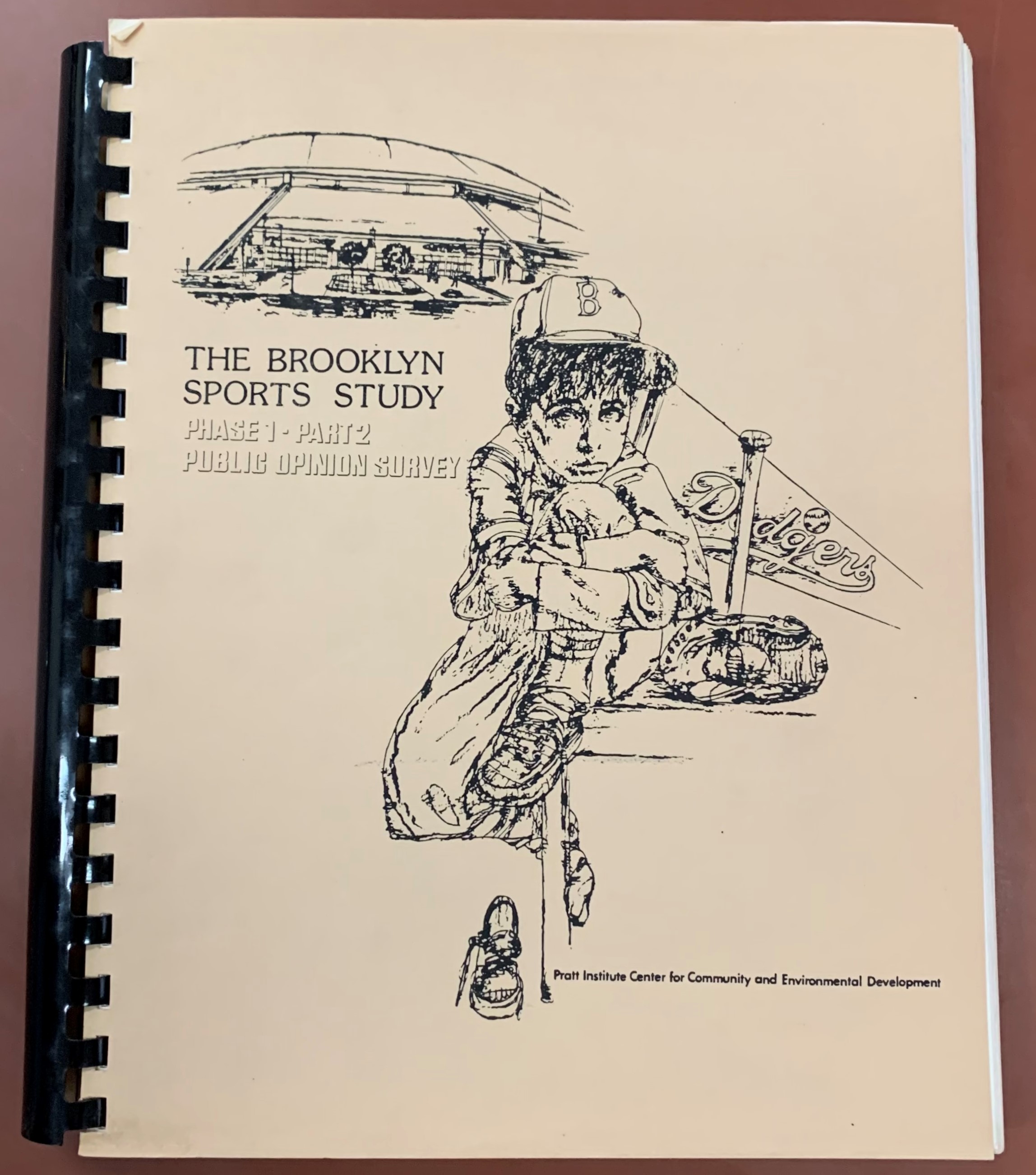 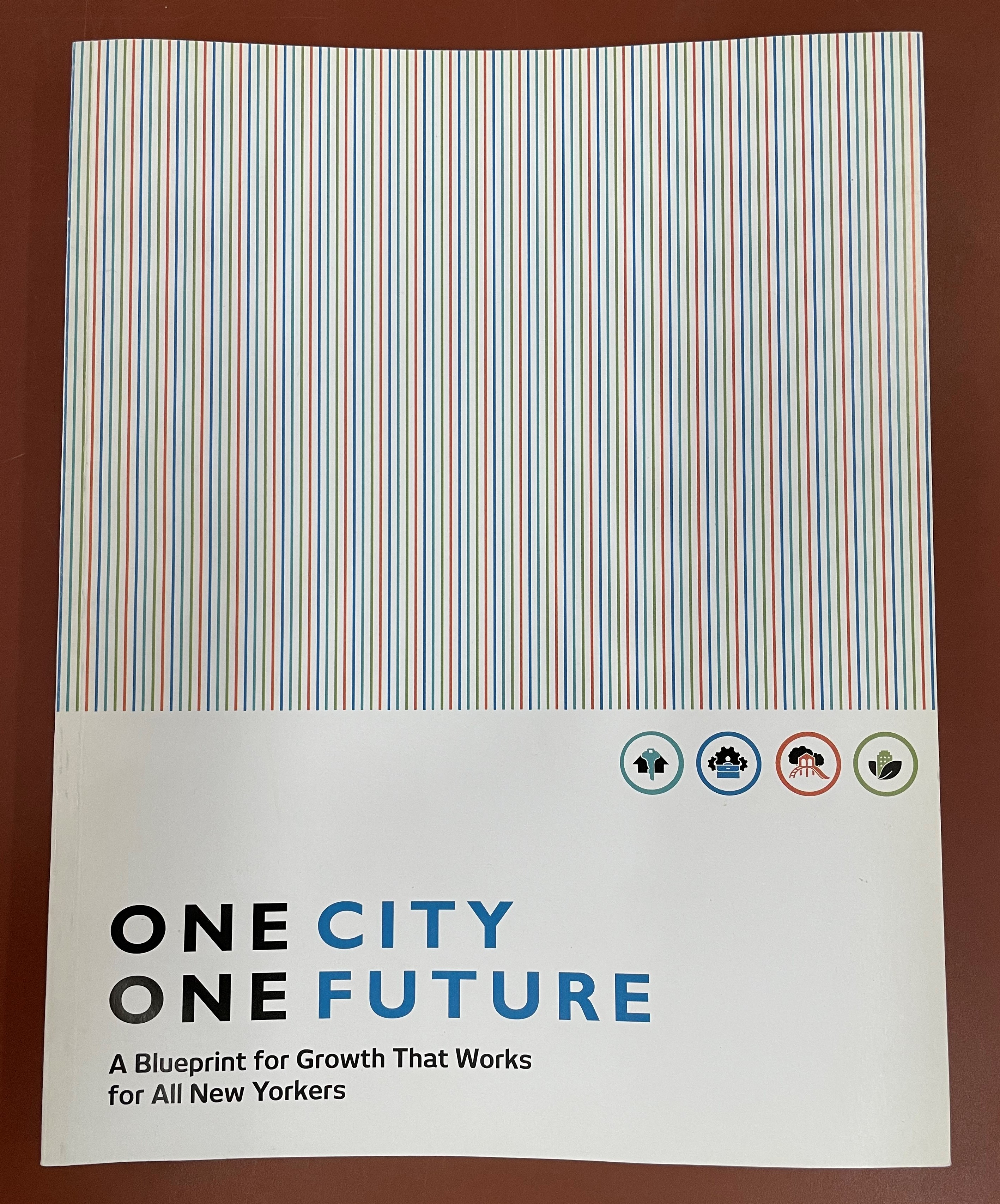 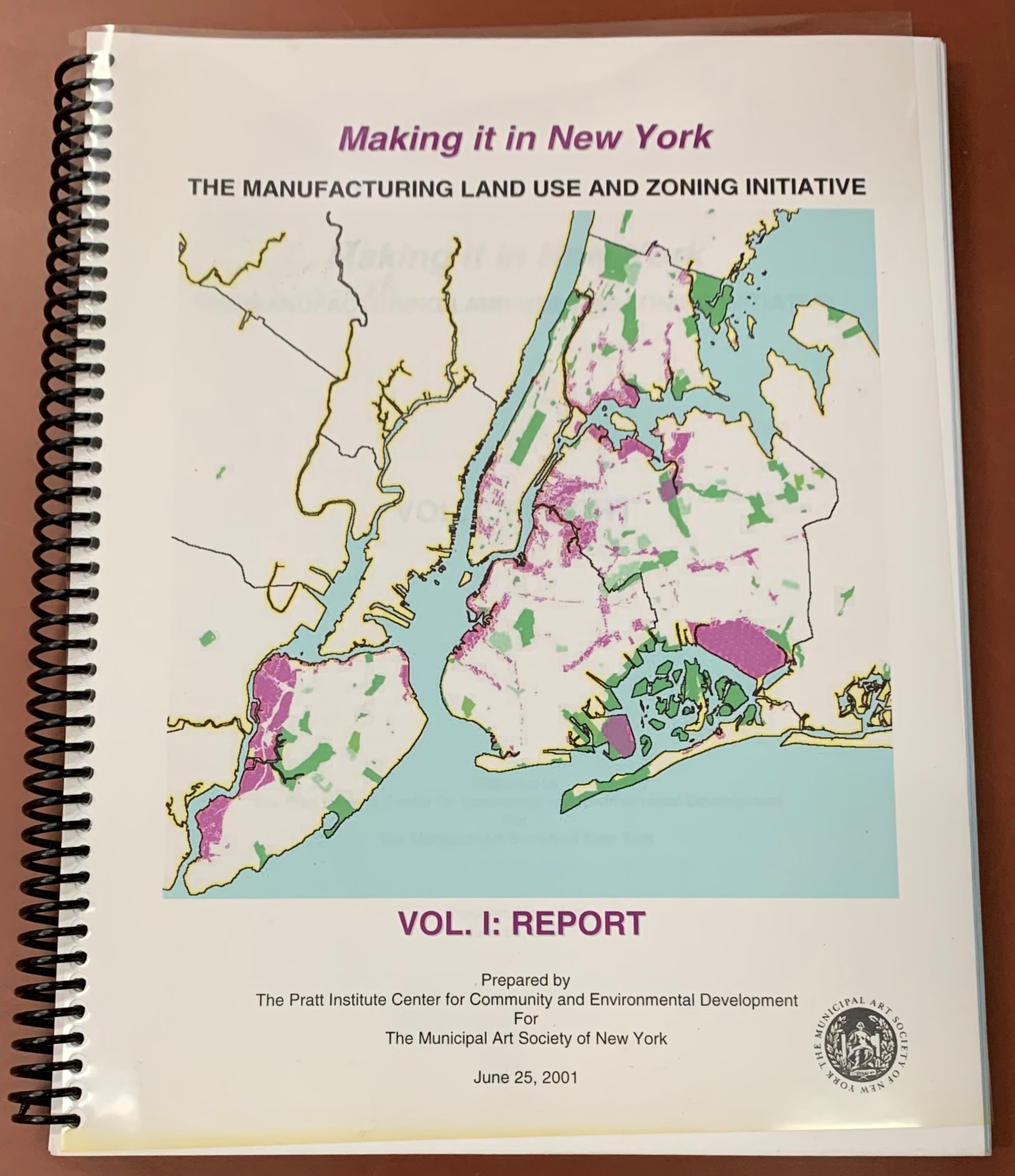 Throughout its history, the Pratt Center has produced educational materials for both organizations and community members. The ephemera subseries of the collection includes several community focused posters from the early 1970s. 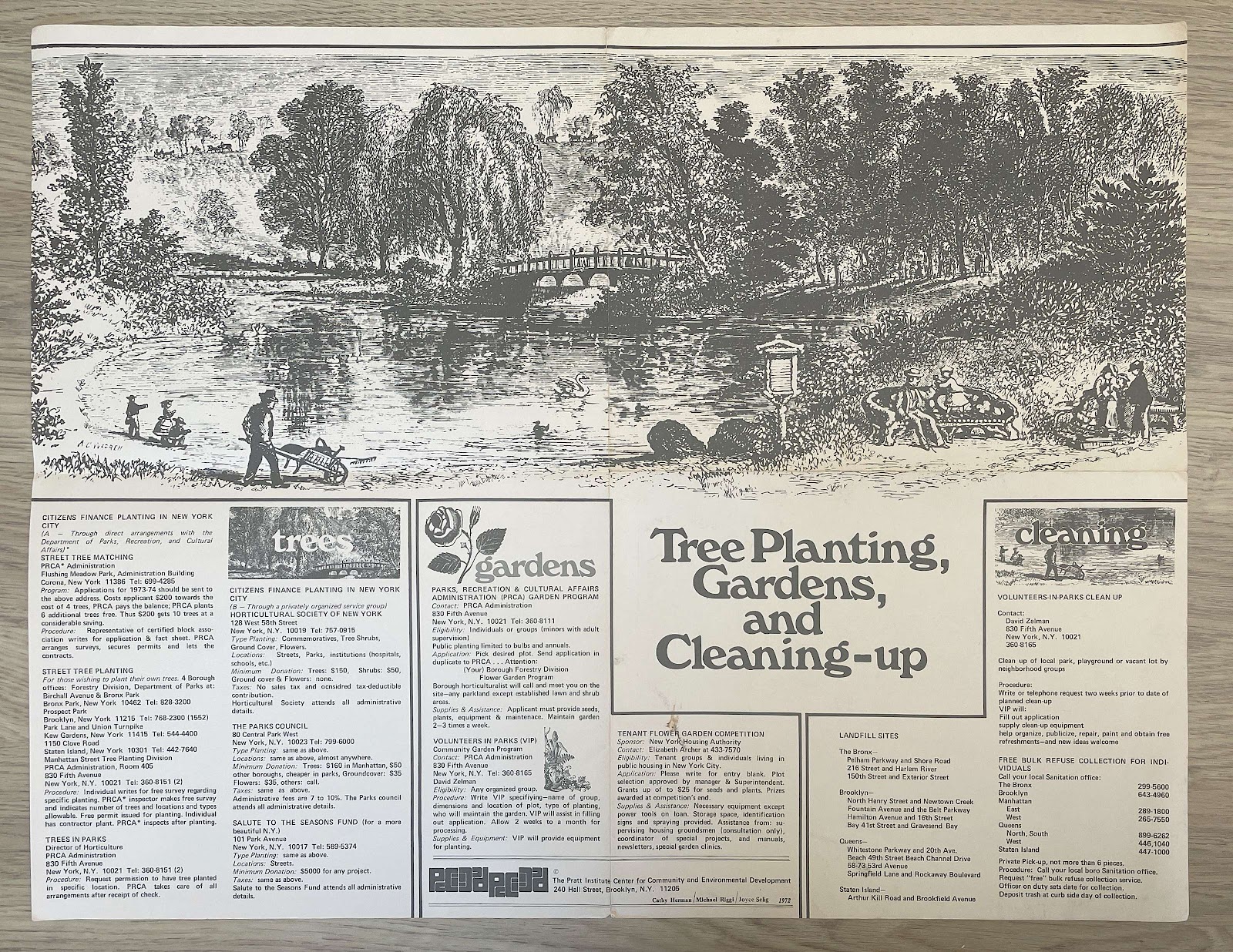 From 1972, a community focused guide to tree planting, gardening, and cleaning-up. 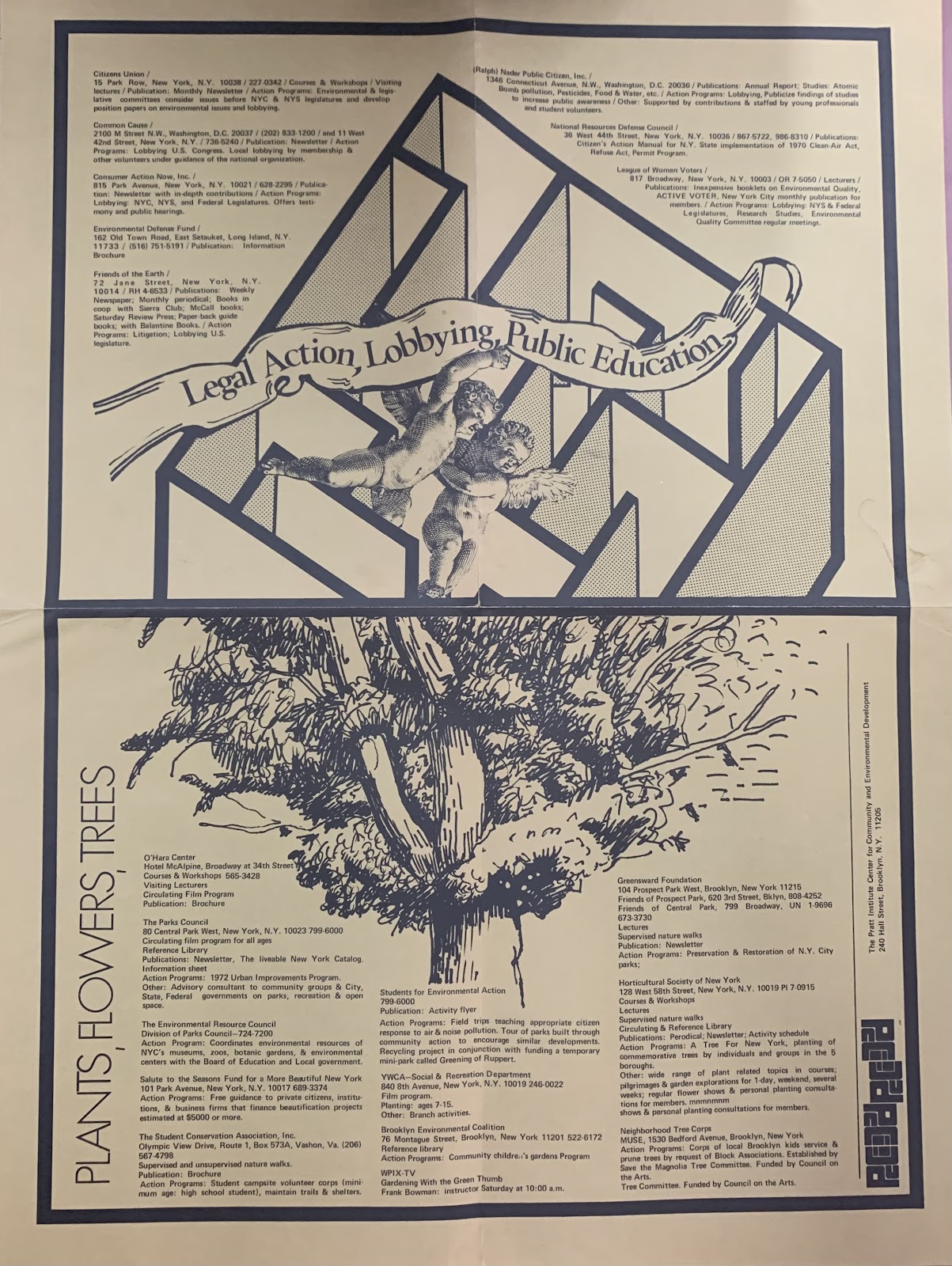 A community guide to legal services and public education, undated.

Records related to the Brooklyn Navy Yard consist of materials that document the behind-the-scenes work of the Pratt Center to plan, implement, and report on its projects and partnerships. Major projects include the Pratt Center’s work on several 197-A plans and recent advocacy for transportation equity in Hunts Point. Of special interest is the Center’s extensive work in the Brooklyn Navy Yard, which reflects the Pratt Institute’s ongoing relationship with the area. 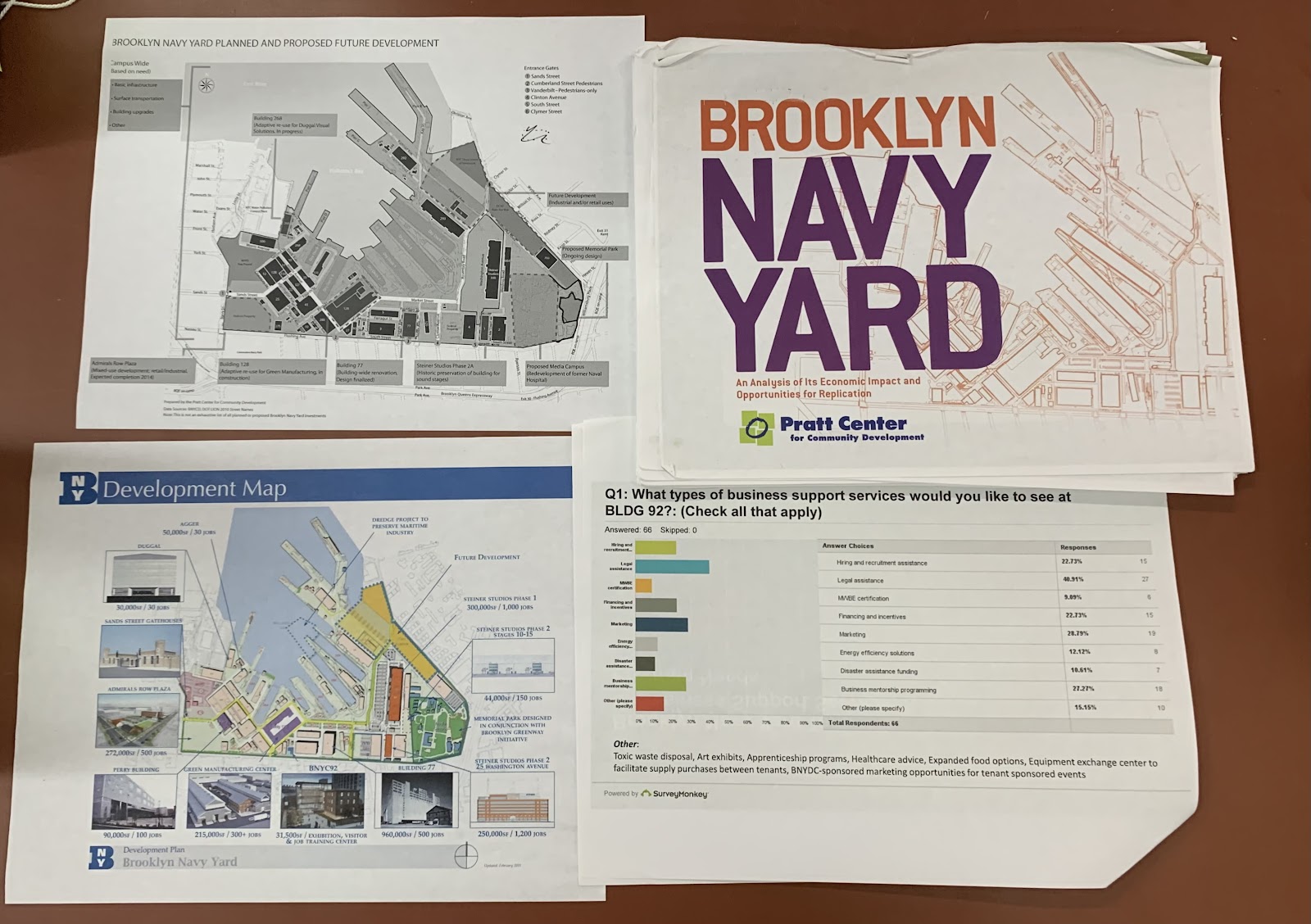 Some of the contents of the Brooklyn Navy Yard series.

The Community Economic Development Internship was a significant educational program organized by the Pratt Center in the 1980s and 1990s. Its goal was to equip individuals, particularly those with marginalized identities, working for community-based organizations with the skills necessary to lead the implementation of programs in their neighborhoods.  Many of the graduates of the program went on to complete advanced degrees at Pratt and notable alumni of the program include Brad Lander, former director of the Pratt Center and current New York City Comptroller. 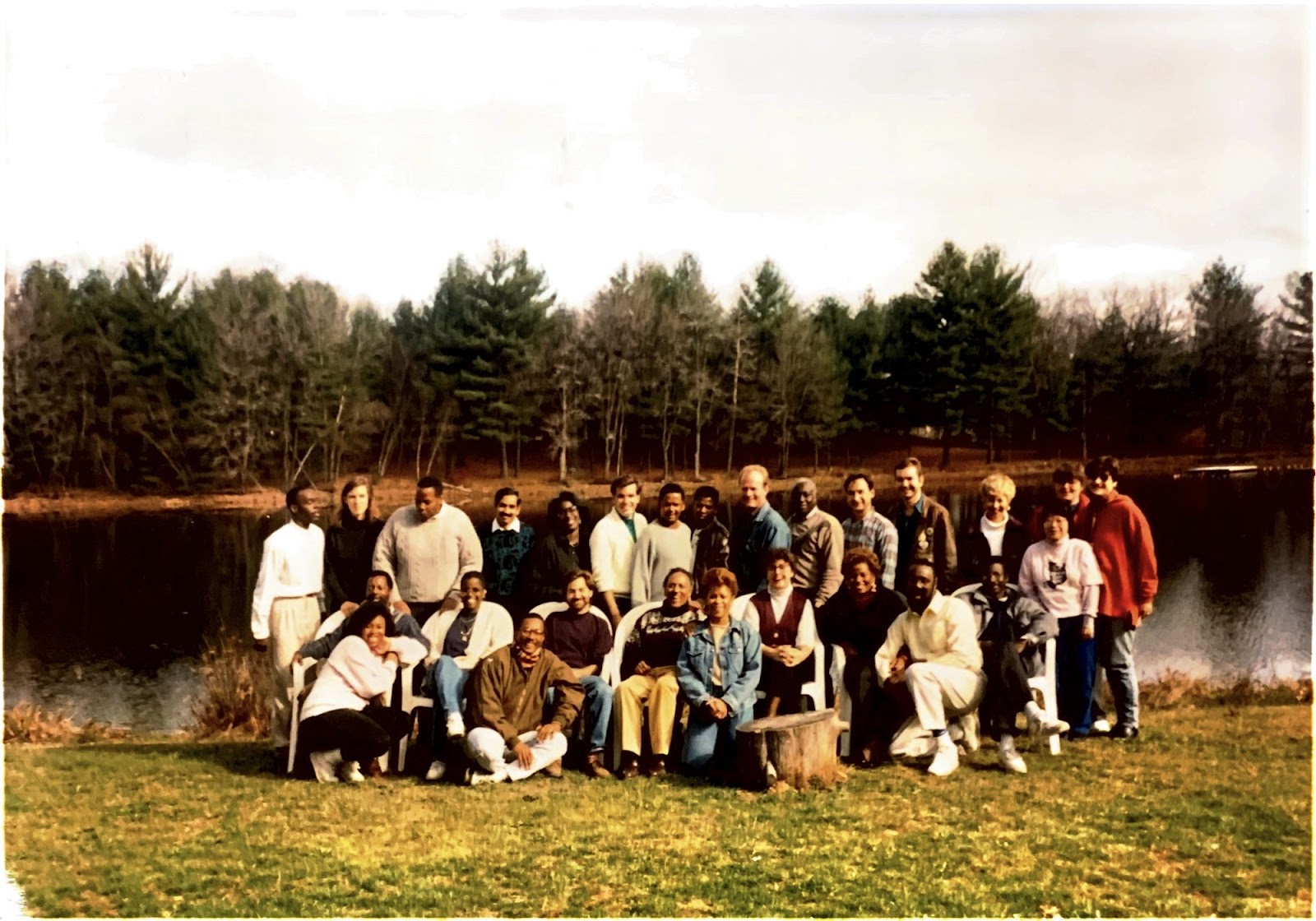 Group photo of the Community Economic Development Internship Class of 1992. 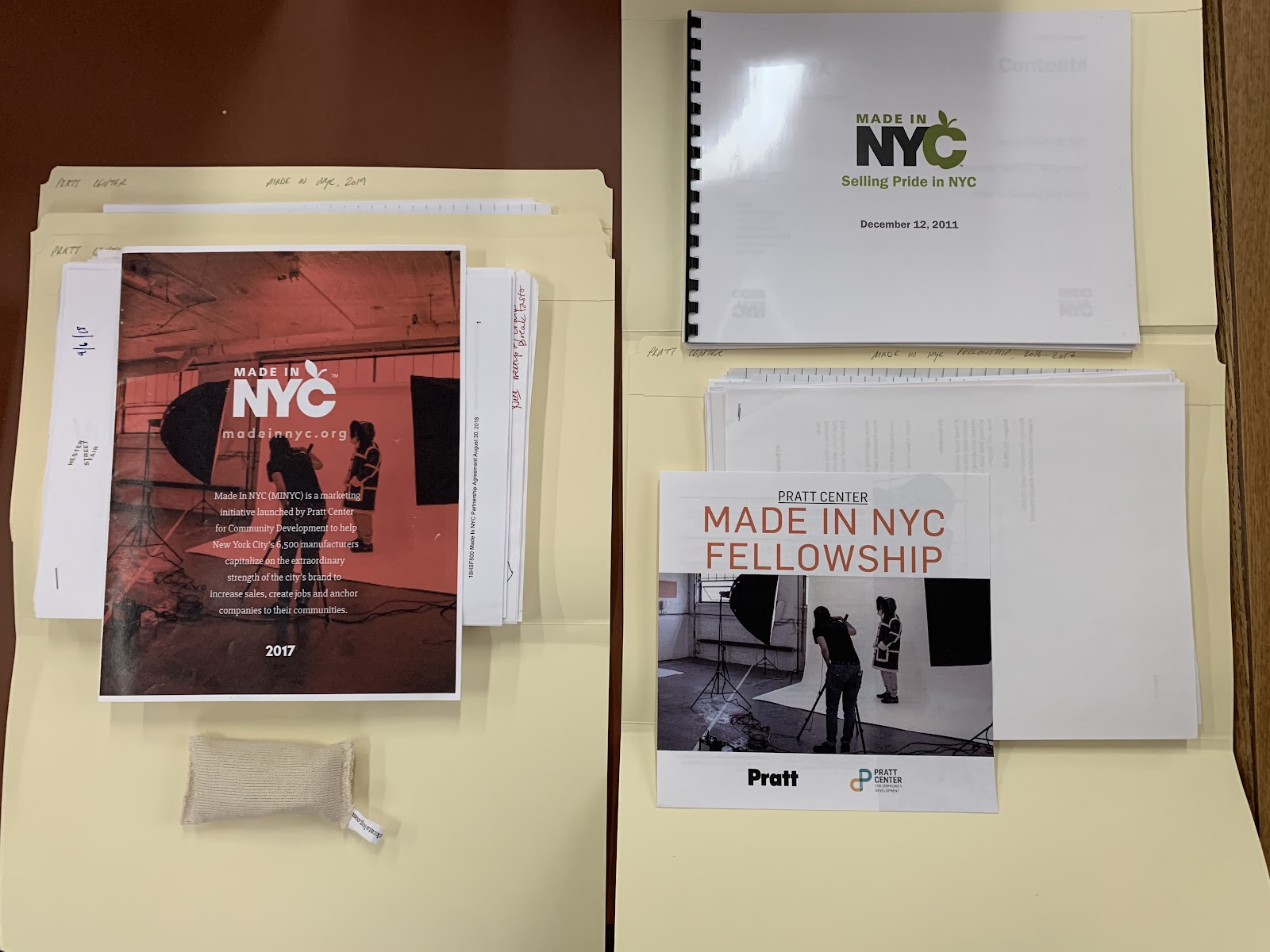 Documents from the collection’s Made in NYC series.

The Future of the Collection

Processing this collection certainly taught me a lot about the history of New York City, its constituent communities, and the challenges they have faced historically (and now). The Pratt Center works closely with and, in many ways, is an extension of Pratt’ students and faculty. I imagine this collection could play a role in any instruction at Pratt that wants to help students understand how what they learn in the classroom can contribute to the wellbeing of, in a very literal sense, their neighbors. Similarly, it can provide lessons in best practices for anyone interested in community development or collaborating with community organizations, and I hope it might serve as an example for the design of community-centered programs and projects. Finally, anyone interested in researching the history of community development in New York City, even more broadly than through just the lens of Pratt’s involvement, will find this collection an invaluable resource.