Skip to main content
It looks like you're using Internet Explorer 11 or older. This website works best with modern browsers such as the latest versions of Chrome, Firefox, Safari, and Edge. If you continue with this browser, you may see unexpected results.

At the Libraries, we are frequently asked questions about the “superlatives” in our collection: the oldest, the smallest, the largest, etc. Sometimes we know what it is right away, but in other cases, we have to do a little research to get the answer. In the spirit of these questions, we are launching a new semi-regular feature on Iron & Glass devoted to Library Superlatives in which we will highlight unique items from the collections, sharing what we know about the works and how they came to the library.

Our inaugural post of Library Superlatives will address one of the most frequently asked questions I encounter as the Head of Special Collections: How old is the oldest book in the collection?  The answer is 538 years old; the Chronicon printed in 1483 by the famed German-born, Venetian-based master printer Erhardus Ratdolt. 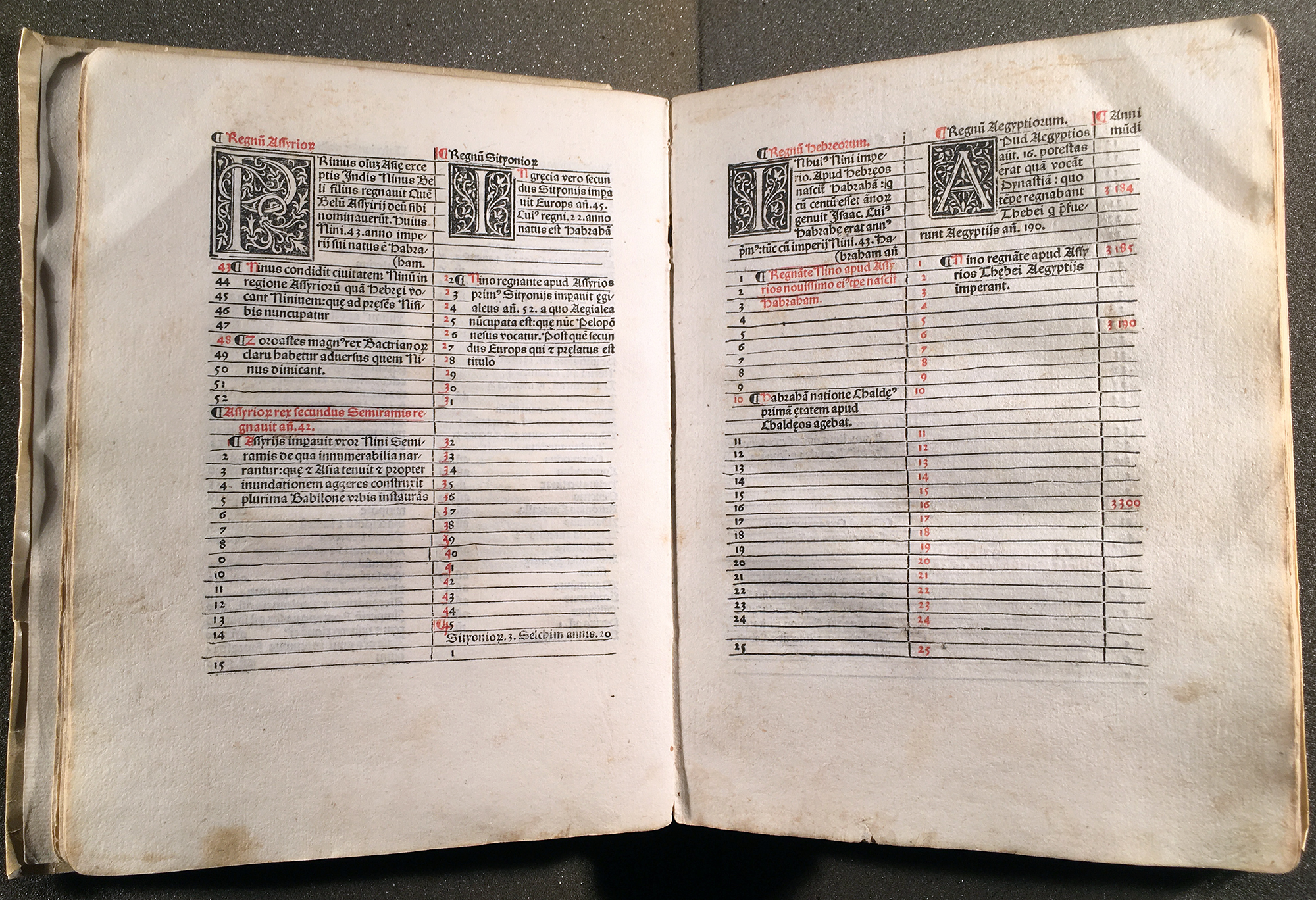 Opening tables from the Chronicon printed in 1483, beginning with the history of the Assyrian empire.

The Chronicon, which translates to chronicle or chronology from the Greek, was first compiled by Eusebius, the Bishop of Caesarea in the early 4th century AD and chronicles the history of the Christian West beginning with the Old Testament figure of Abraham and ending with the baptism of Emperor Constantine I in 325 AD, the first Roman emperor to convert to Christianity. This history is told not in a narrative form, but rather as a list of the most important events in history organized in a tabular format using parallel calendrical systems.  Although Eusebius’ original Greek text is lost, it exists in translations into Armenian and most famously into Latin by Saint Jerome, who expanded it to 379 AD and whose version is the most well known.

The Chronicon in Pratt’s Special Collections brings the chronicle up to 1448 and was compiled by the Florentine Humanist Matteo Palmieri.  It includes Eusebius and Jerome’s original tables, as well as supplements by Prosper of Aquitaine that had previously brought the chronology to 448 AD.  This edition famously includes what is considered to be the first printed reference to the invention of printing using movable type by Johannes Gutenberg, an apt historical moment to be included in the Libraries’ oldest book:

It is beyond the power of words to express how much students of letters owe to the Germans. For a method of printing  was devised in 1440 by the clever genius of Johann Gutenberg, a knight of Mainz.  In this time, it has been extended to almost all parts of the world. The whole of antiquity, being collected in small pieces of brass [type], is read by posterity in an infinite number of volumes.

Left and Right: Full page and detail showing the text related to Gutenberg and the invention of movable type.

The Libraries’ edition of the Chronicon is an example of an incunabulum, a term used to describe books printed between 1455 and 1500, roughly from the “invention” of printing by Johannes Gutenberg to the time when conventions of printing books and the surrounding industry became conventionalized and standardized.  The word incunabulum goes back to the Latin name for swaddling or cradle and references the fact that these books were created during the infancy of the printed book, which was to become one of the most significant technological innovations of the early modern period. This book was printed by Erhardus Ratdolt, an early German printer from Augsburg, who was active in Venice from 1476 to 1486. One of Ratdolt’s claims to fame is that he printed the first specimen typesheet, the prototype for font selection tools that are still in use today. His signature use of red and black fonts and print layouts, moreover, became the inspiration for Williams Morris and the Kelmscott Press, a few examples of which are also available in the libraries’ collection. 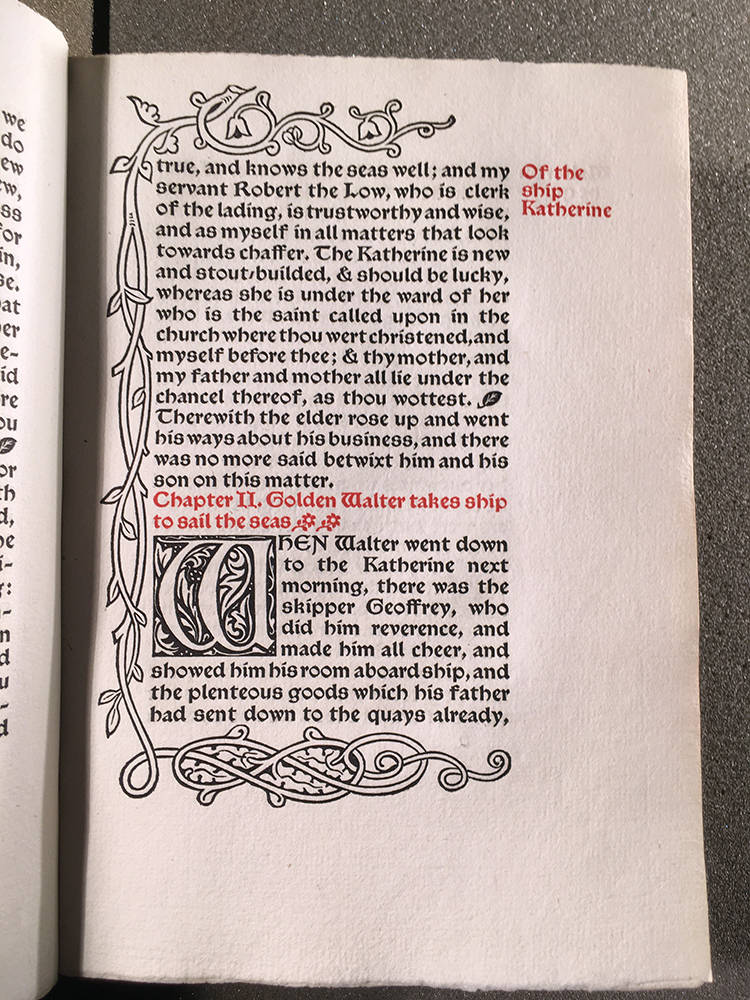 Left: Introduction to the Chronicon showing Ratdolt’s use of woodblock initial letters and red and black lettering. Right: Page from the Wood Beyond the World by William Morris printed by the Kelmscott Press in 1894 showing the influence of Ratdolt’s typography. 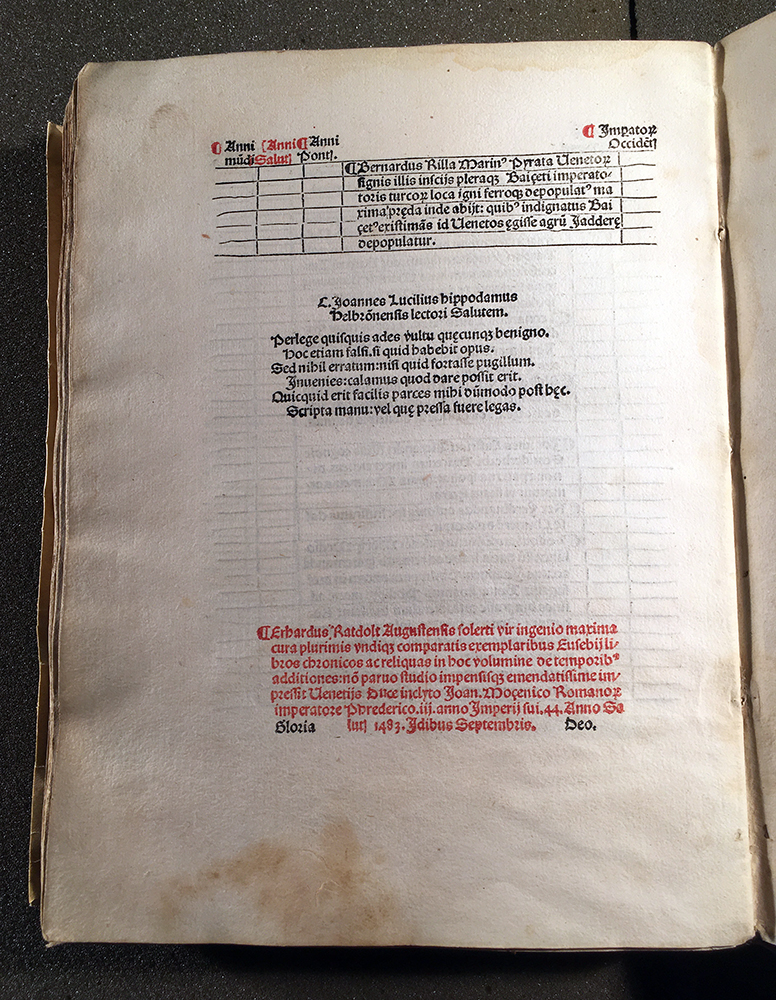 Left: Page from the introduction to the Chronicon showing the use of a handwritten manicule pointing to a line in the text. Right: Colophon (or imprint) in red referencing the “clever genius” of Ratdolt in printing this book, thereby linking himself to the earlier mention of Gutenberg in the text.

According to the Incunabula Short Title Catalog, Pratt’s is one of 255 copies of this book in libraries across the globe.  According to the 1930 Report of the Pratt Institute Free Library the book was gifted to the Library by Otto Vollbehr, whose bookplate graces the inside cover of the book. Edward F. Stevens, the director of the library at the time testified before Congress urging them to purchase Vollbehr’s collection of 3,114 incunabula (including one Gutenberg Bible) for the Library of Congress’ collection. On July 3, 1930, Herbert Hoover signed a bill authorizing the expenditure of 1,500,000 dollars to purchase the Vollbehr collection, quadrupling the number of fifteenth century books held by the Library of Congress. (Hard to imagine Congress passing bills about rare books these days!) It appears that Vollbehr donated the book to Pratt as a way of thanking Stevens for his testimony. 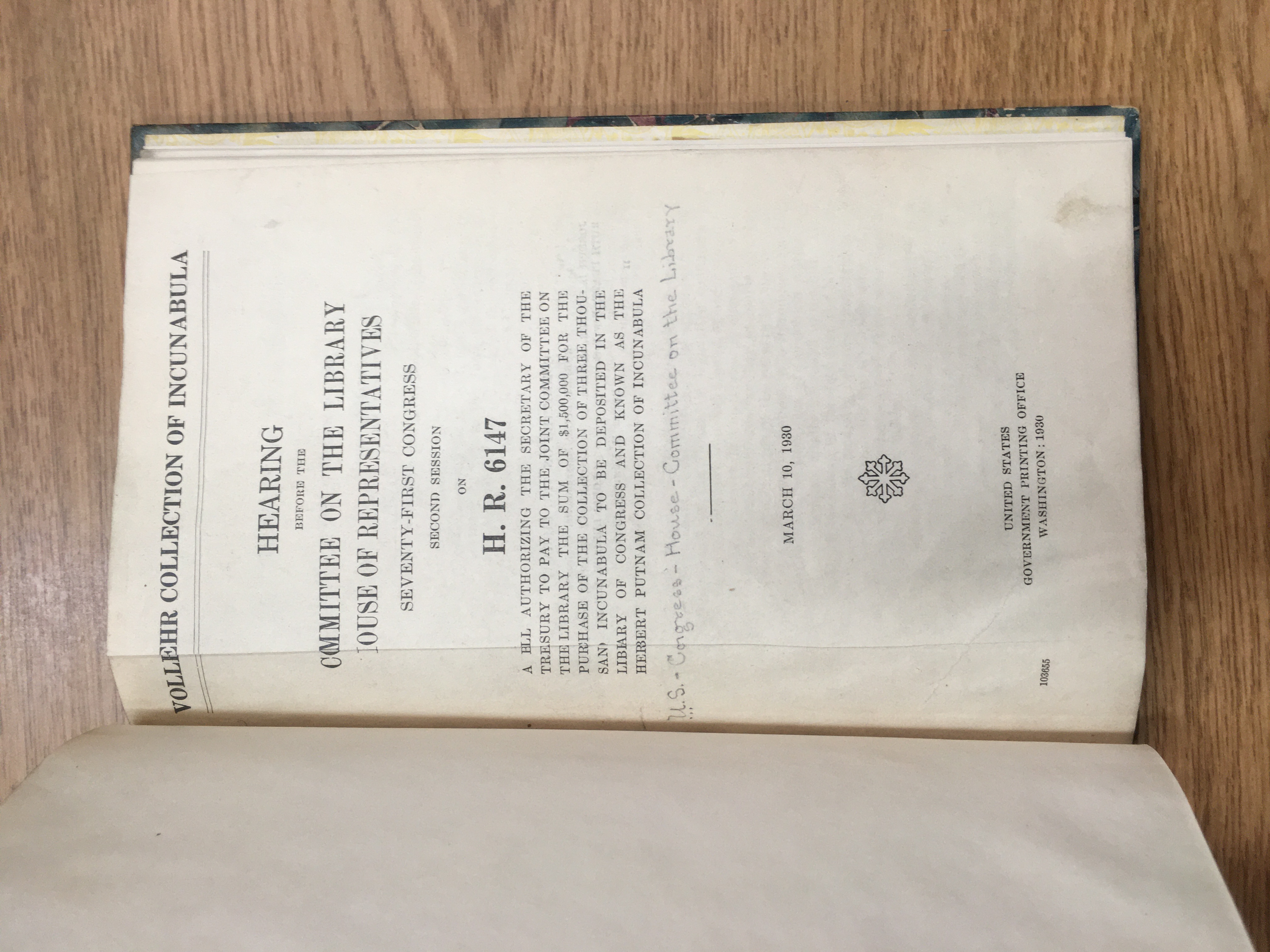 Left: Inside cover of the Chronicon with Vollbehr’s bookplate and the Pratt Institute Free Library bookplates. Right: Title page of the documentation of the hearing on H.R. 6147, the bill Congress passed to approve the purchase of the Vollbehr Collection by the Library of Congress.

The Libraries’ copy is bound in limp vellum and the title and date are hand-lettered on the outside. Back in the days of incunabula and early printed books printing and binding of books happened separately, and it was normal practice for bindings not only to be made in a different shop, but also at a much later date than the printed text. Vellum bindings, like this one, however, are more likely to be contemporary with the printing of the actual text and may even have been made in the print shop. 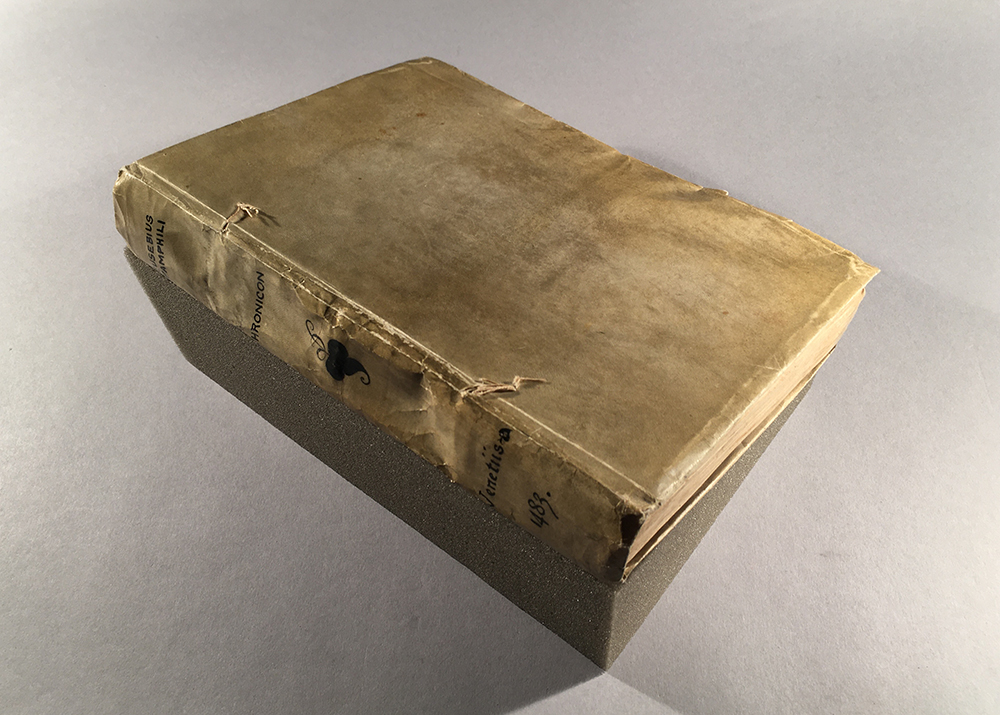 Left and right: Views of the limp vellum binding featuring hand lettering and a fleuron on the spine.

Edward F. Stevens served as the Director of the Pratt Free Library from 1911-1938. He was a book arts enthusiast and oversaw the collection of numerous early printed books, fine press books, and books about the early history of printing. He was single-handedly responsible for purchasing almost all of the early printed books in the Libraries’ collection, which were once kept in his office and still serves as the office of the Director of Libraries today. He also spearheaded such initiatives as the creation of an original library bookplate installing a printing press in the library, and producing such small run publications, as An Outline of the History of Printing (1937) and The Story of Pratt Institute 1887-1937. It is fitting, and would likely have pleased Stevens, that the oldest book in the Libraries’ collection today is a part of his legacy and zeal for printed books and their history. 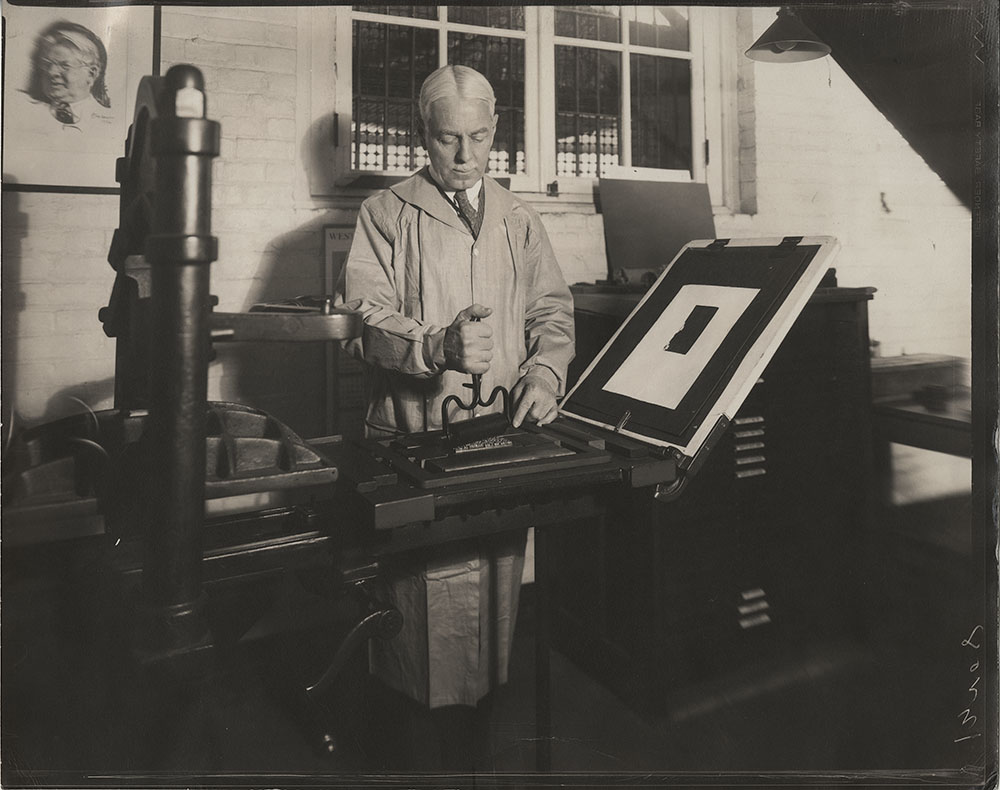 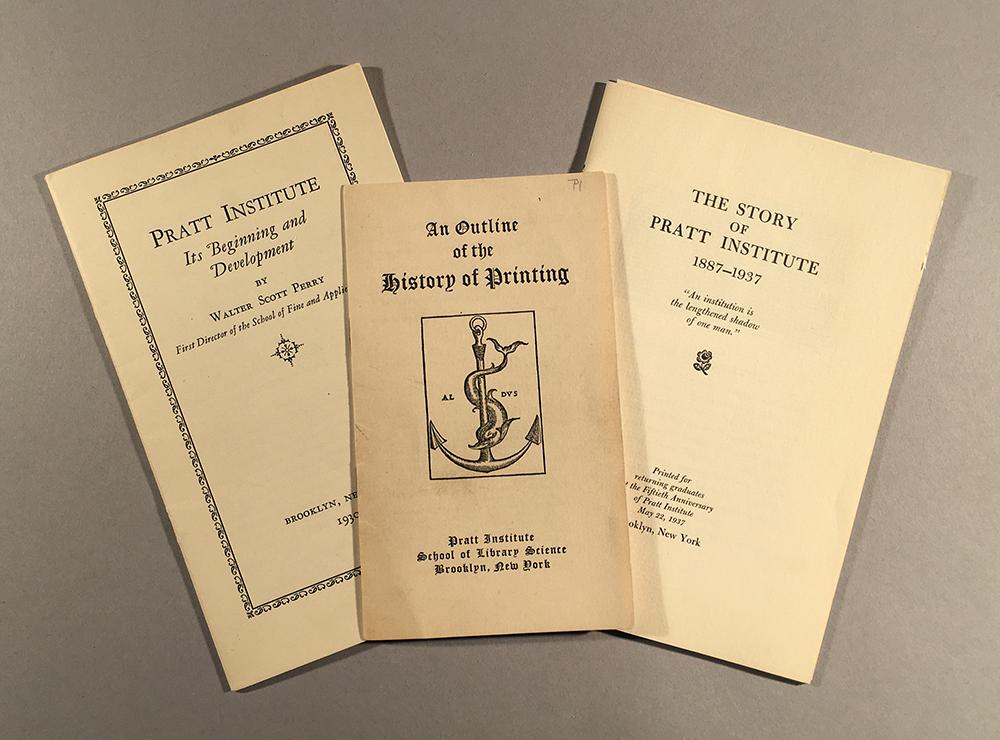 For more information about incunabula and the collections of the Pratt Institute Libraries, please explore the links below:

Against the Blank Page: Strategies for Creative Research in Chaotic Times
A School of One's Own: Ellen Dunlap Hopkins and the New York School of Applied Design for Women
Library Superlatives: The Oldest Book
Protests at Pratt: Student Activism Then and Now
A Year in the Archives