From the Classroom to the Catwalk: Pratt Fashion Shows Throughout the Ages

Every February and September, international fashion designers, models, and critics converge on New York City for the semi-annual New York Fashion Week, where exclusive and upcoming designs are showcased. Fashion shows, characterized by live models and runway walks, have been an integral part of the fashion world since the late 1890s, and Pratt’s fashion students have been partaking in the tradition since the earliest years of fashion shows’ introduction to America.

The first fashion show at Pratt is said to have been held in 1899, specifically to showcase the work of Costume Design students, then a course in the Department of Domestic Art. In the years prior to 1899, the Department held annual exhibitions of student work, primarily in dressmaking, millinery (hat-making), and embroidery. While there are few records detailing these early end-of-year shows, we do know that they were major social events, with over a thousand people attending the fashion show of the Evening School students in 1929. 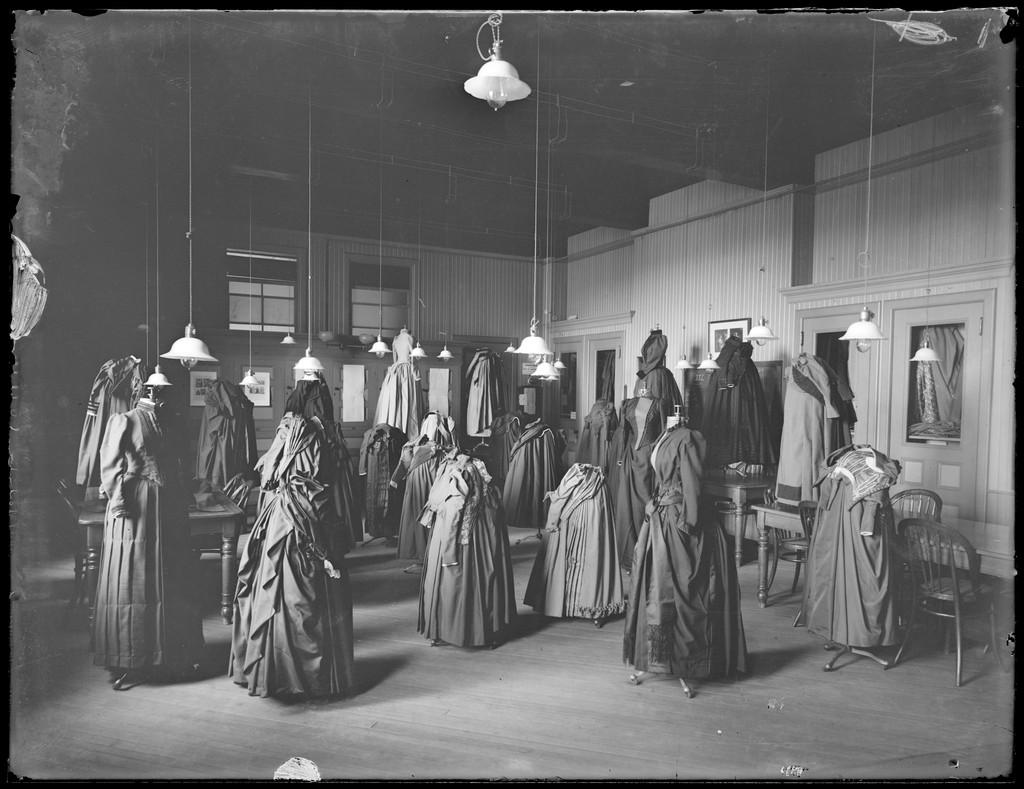 Pratt students in the 1920s and 1930s also participated in the Budget Fashion Show, an annual competition focused on practical designs and economical production costs. The Budget Fashion show was first held in 1924 and hosted by the New York Federation of Women’s Clubs as well as Wanamaker’s Department Store Home Budget Service. 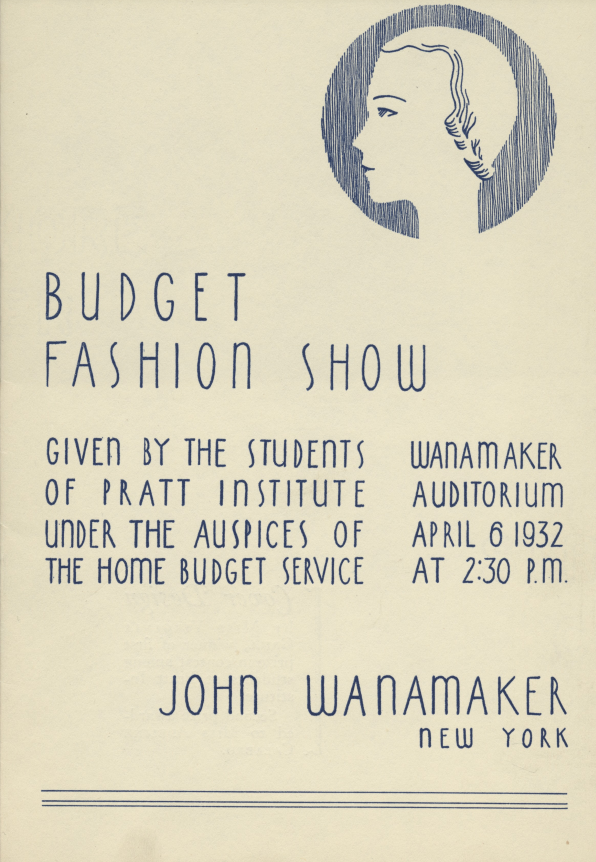 Program from the Budget Fashion Show, 1932.

Participating students, who came from both the School of Fine and Applied Arts as well as the School of Household Science and Arts, were asked to use Wanamaker materials to create designs that met a specific need in their wardrobe. Designs were placed into categories such as “The College Girl”, “The Woman in Business”, and “Travel and Vacation Wear” and students entered a wide range of ensembles including party dresses, streetwear, bathing suits, pajama sets, and work attire. Unlike the Annual Pratt Fashion Shows, which focused on displaying student work from the academic year, the Budget Fashion Show awarded cash prizes of $20 to top designs, with judges from notable fashion institutions and magazines like Harper’s Bazaar and Vogue looking at originality, line and silhouette, and smartness.

Beginning in the 1930s, the Fashion Show was occasionally held as the Fabric Fashion Show, hosted by the Abraham & Strauss Fabric Shop. Both Wanamaker’s and Abraham & Strauss offered budget services and budget shops, which provided items of clothing at a lower cost as well as budgeting advice for furnishing homes. While the primary intent of the service wasn’t to make sales, advisors would make product recommendations based on the shoppers’ budgets. The Budget Fashion Show continued until at least 1936. Ultimately reflecting the socio-economic climate and anxieties of the Great Depression, the Fabric and Budget Fashion Shows provided an opportunity for Pratt students to build practical skills of thriftiness and creativity by designing affordable clothes while also gaining exposure and experience in the fundamentals of the fashion industry. While production costs were not a determining factor for prize winners, the price of materials for each ensemble was often included in show programs, and in 1932, these ranged from $4.00 for a gray wool dress to $30.25 for a black and white Georgette evening gown. 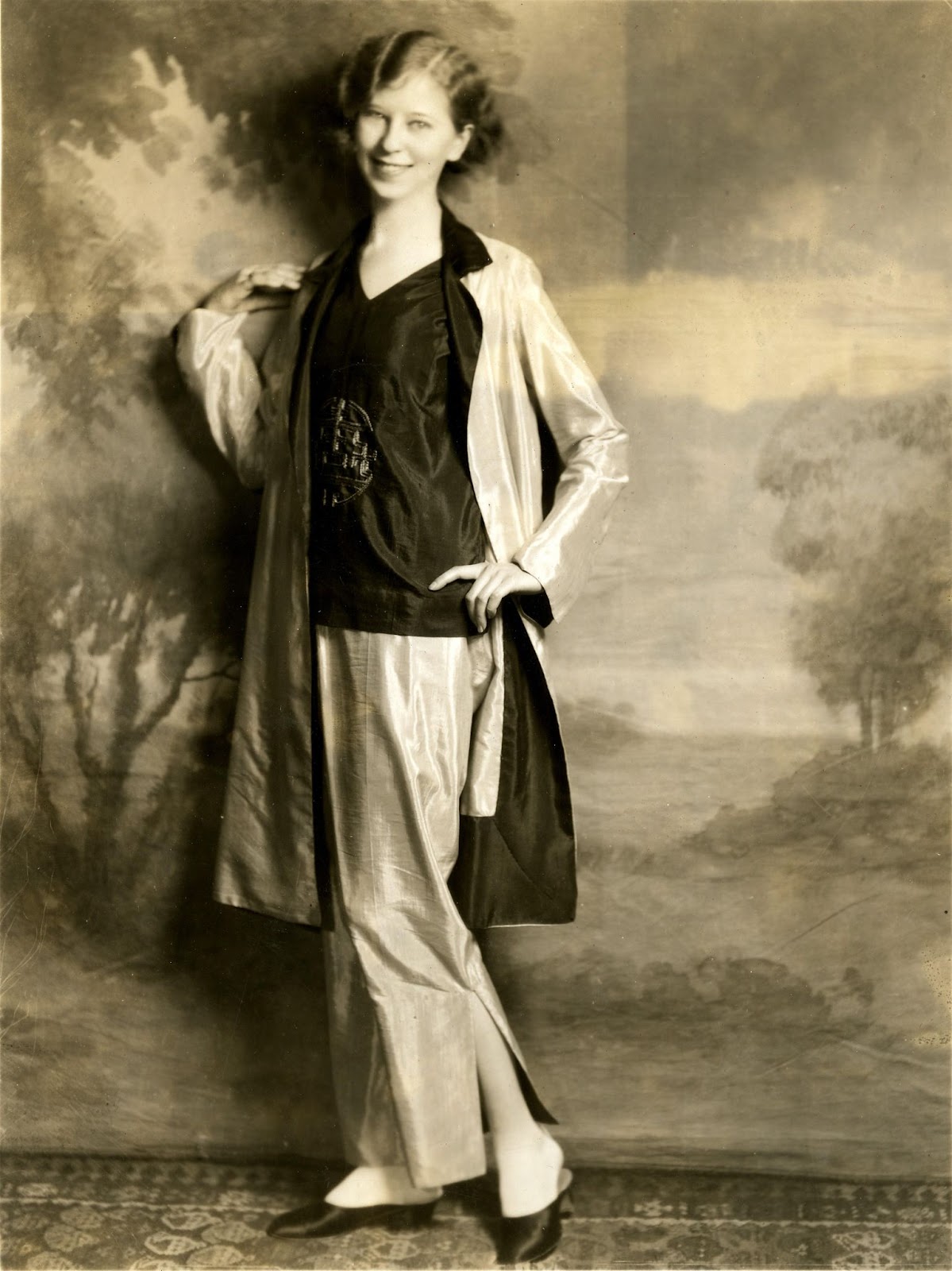 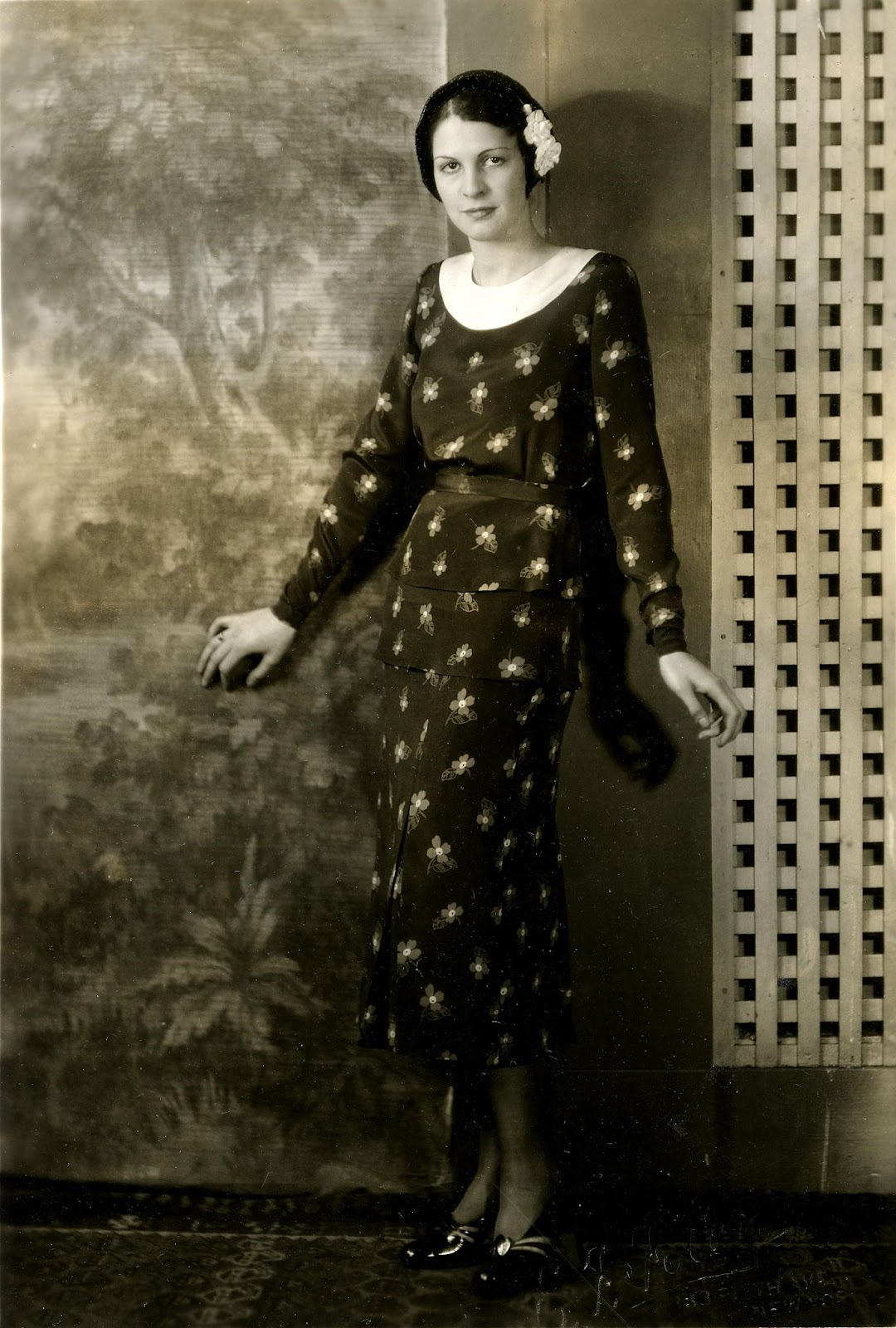 Left: Madeline Lyon (Homemaking ‘29) modeling a set of pajamas created for the Budget Fashion Show in 1928. Her outfit cost $5.69 to create and won first prize in her group. Right: Jeannette Salisbury (Dressmaking ‘30) poses in her second-prizing winning dress from 1927. Made from printed silk, her dress cost $11.60 to make.

The onset of World War II in the 1940s led to a temporary decline in fashion shows at Pratt, although the newly named School of Home Economics, which held the Costume Design program, continued to hold modest exhibitions of student work at the end of the year. Even though academic programming in this era tended to focus on wartime necessities such as camouflage, dressmaking students continued to develop designs for all activities and display them for their peers, friends, family, and potential employers.

By the early 1950s, the Annual Fashion Show started to reappear in school and local press, a result of the gradual economic recovery and the return of luxury and leisure after the war. The Pratt Fashion Show continued to grow as an exhibition of student work from the school year, but began to feature more experimental designs to draw the attention of industry professionals and manufacturers, who were regularly invited to the Fashion Show. While there are few photos from Pratt Fashion Shows in the 1950s, those in our collection show that Pratt students, along with other women in the U.S., favored chic, feminine clothing. Many of the outfits from these shows featured popular designs and accessories from the era, including gloves, pearls, well-tailored dresses, flared skirts, and luxurious fabrics such as silk or wool, which were once again available after wartime scarcity. 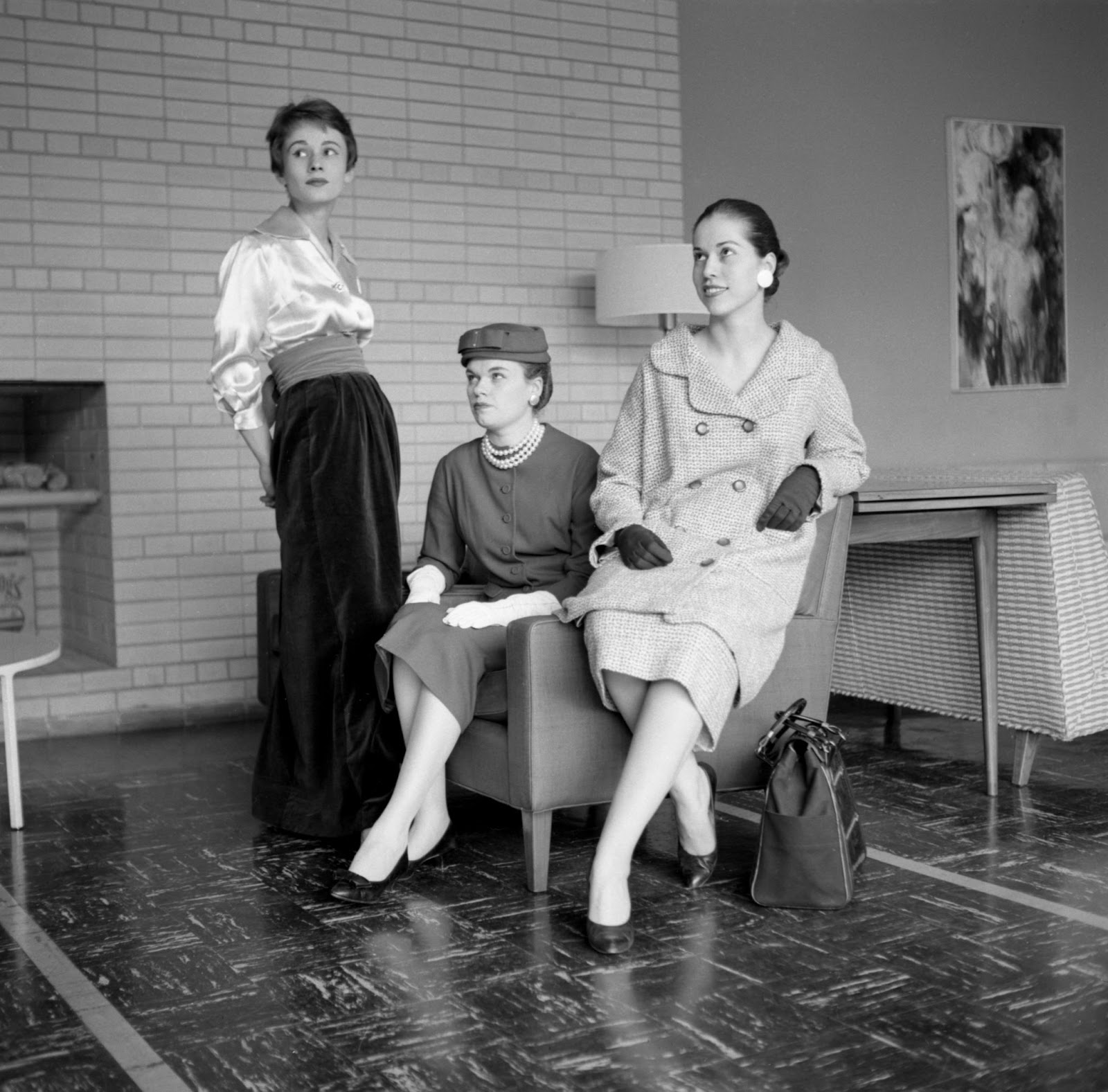 Popular fashions in the U.S. began to shift in the late 1950s however, with the rise of cultural phenomena such as rock and roll, counter culture, and youth movements. Photographs from the Pratt Fashion Shows of this era feature bolder patterns, boxy shapes, and short mini-skirts inspired by the trendy “mod” fashion popularized by models like Twiggy. On the other hand, the Fashion Shows also saw students draw inspiration from hippie fashion, with long, flowing dresses, skirts, and pants, as well as head adornments and bare feet. The majority of designs from these shows have elements of both of these popular styles, and inspirations from other dominant trends from the time; fashion and popular culture during the 1960s emphasized originality and individuality, as this is certainly reflected in Pratt fashion shows, with ensembles that are more unique and experimental than ever before. This trend continues through the 1970s and 1980s and into today, with Pratt fashion students blending popular style, formal fashion training, and their own personal influences to create creative and diverse designs, ranging from wedding gowns to bathing suits. Below are some of my favorite designs from the 1960s, a revolutionary era in fashion as well as culture. 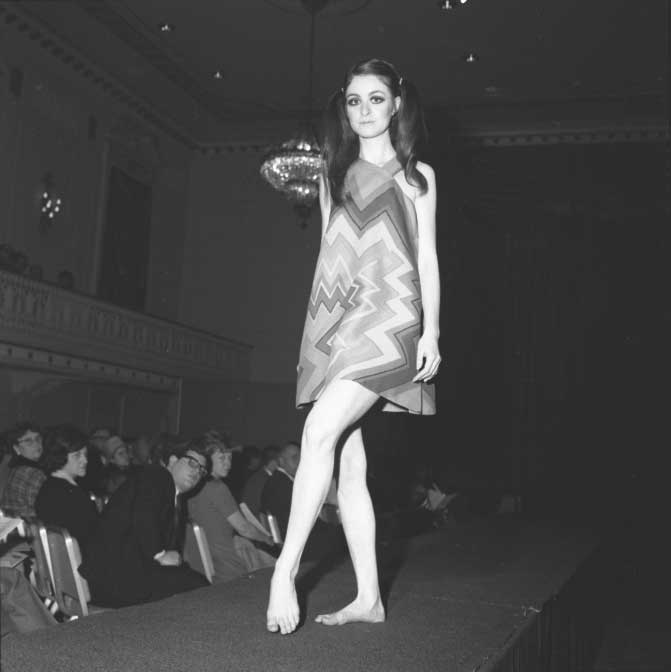 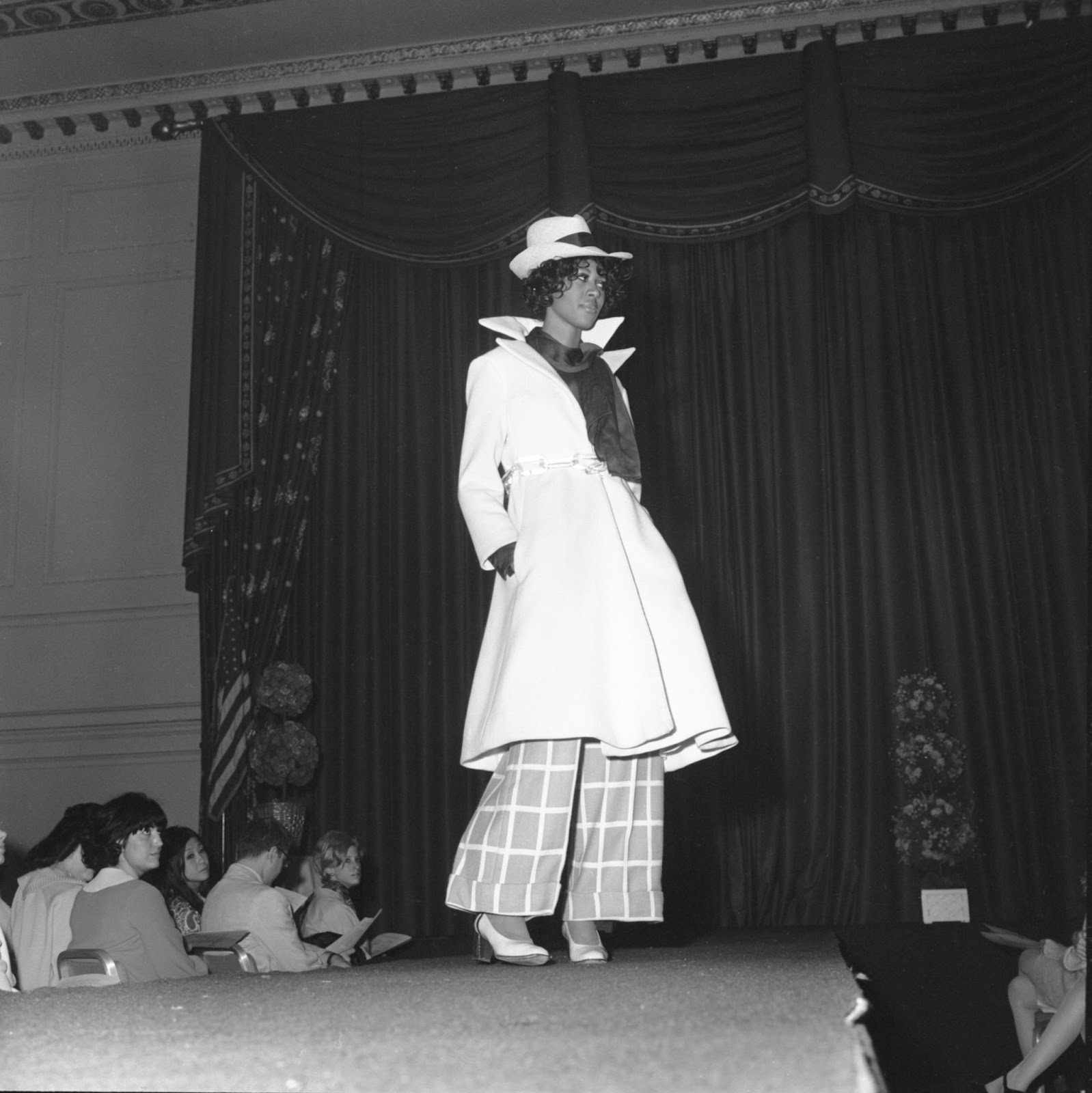 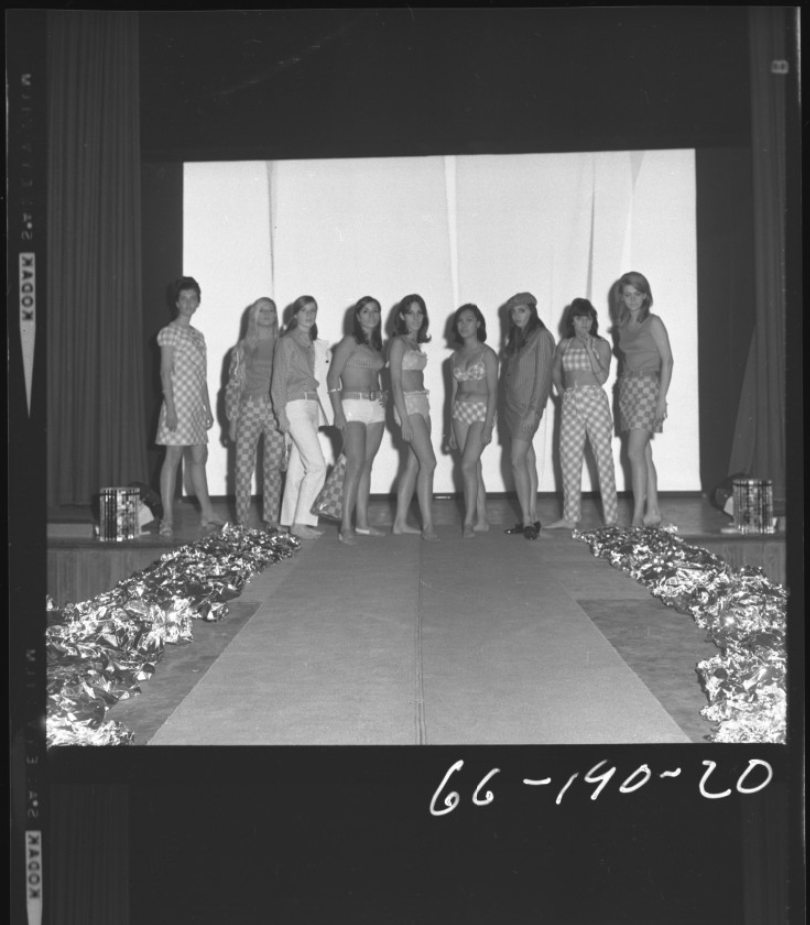 This group photo from the 1966 Fashion Show lets us know that gingham patterns were very “in” that year.

Beginning in the 1960s, fashion shows became an increasingly important part of professional studies at Pratt, with students taking courses on the creation and curation of fashion shows in order to prepare for this staple element of the industry. Consequently, fashion shows became a more frequent occurrence on campus, with students often putting on fashion show series as class assignments. The 1968 issue of the Prattler reviews some of these student shows, with titles such as “Magical Menswear Tour”, “The Game of Fashion”, and “Excellion: The Miracle of Now.” 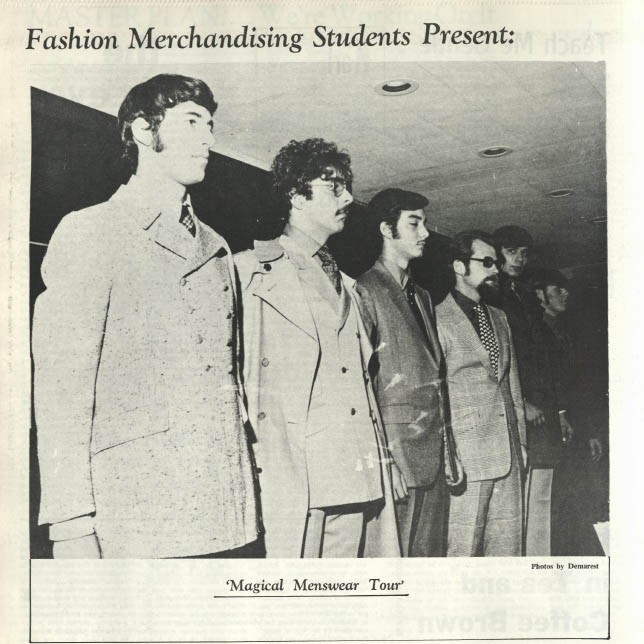 The Fashion Department, then a part of the School of Continuing Professional Studies (check out this blog post for a history of fashion programs at Pratt), also held Alumni Fashion Shows, which served as a benefit for the Pratt Fashion Scholarship Fund and featured both alumni and current students as models. Negatives from the 1965 Alumni Fashion Show give a behind-the-scenes look at models preparing to walk the stage, selecting shoes, and intermingling with each other, which provides an intriguing perspective to the process and preparation of putting on a fashion show. The 1967 Alumni Fashion Show, reviewed in The Prattler, had the theme “Pot…Pourri” and an extensive backstage crew of directors, coordinators, and technicians were brought on to ensure details like accessories, audiovisual effects, and slide projections went smoothly during the show. One “alumni” designer who contributed outstanding work to the show was Betsey Johnson, then a fast-rising star in the fashion world who had attended Pratt for a year before transferring to Syracuse University. According to the reviews, her work stood out from all the rest, and featured a sports outfit that was “very short, with a black top and accessories, zippered zealously. Later in the program came an even briefer shocker: a puckered velvet outfit that barely skimmed past the hips, with stockings of the same material; it was completely backless.” 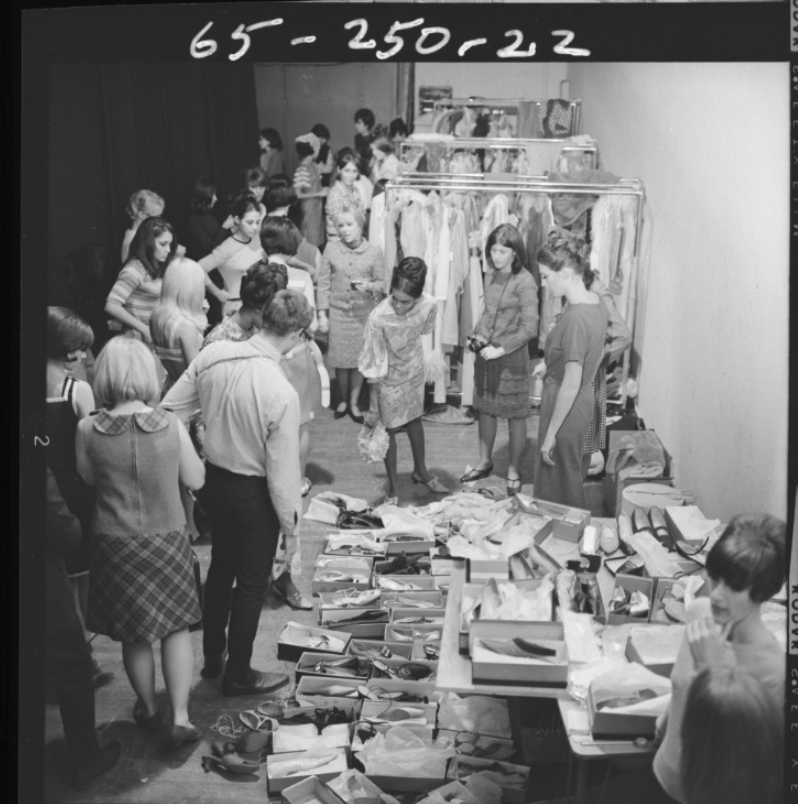 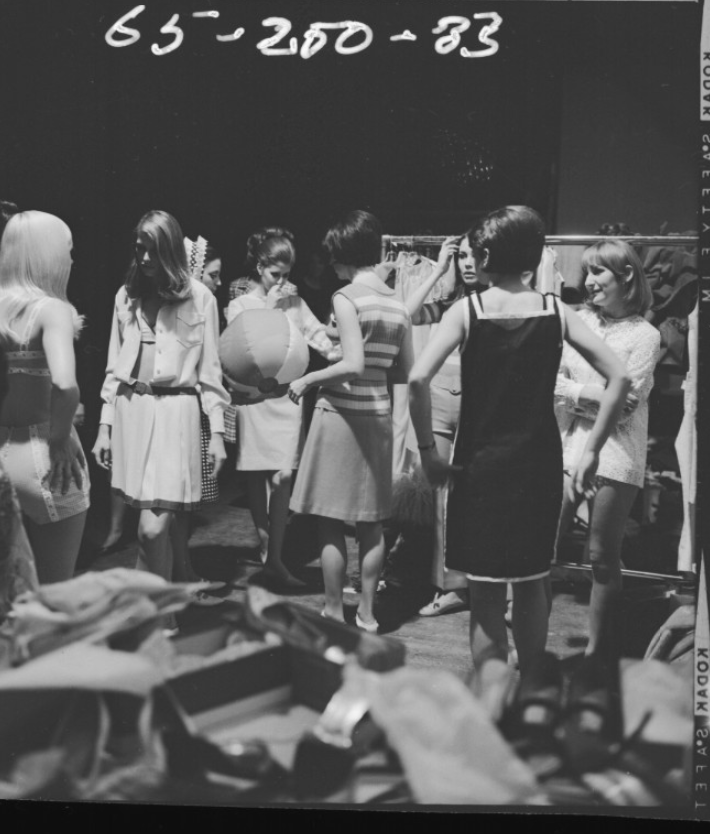 Backstage at the Alumni Fashion Show, 1965.

Looks from the 1971 Show of the Fashion Merchandising program. 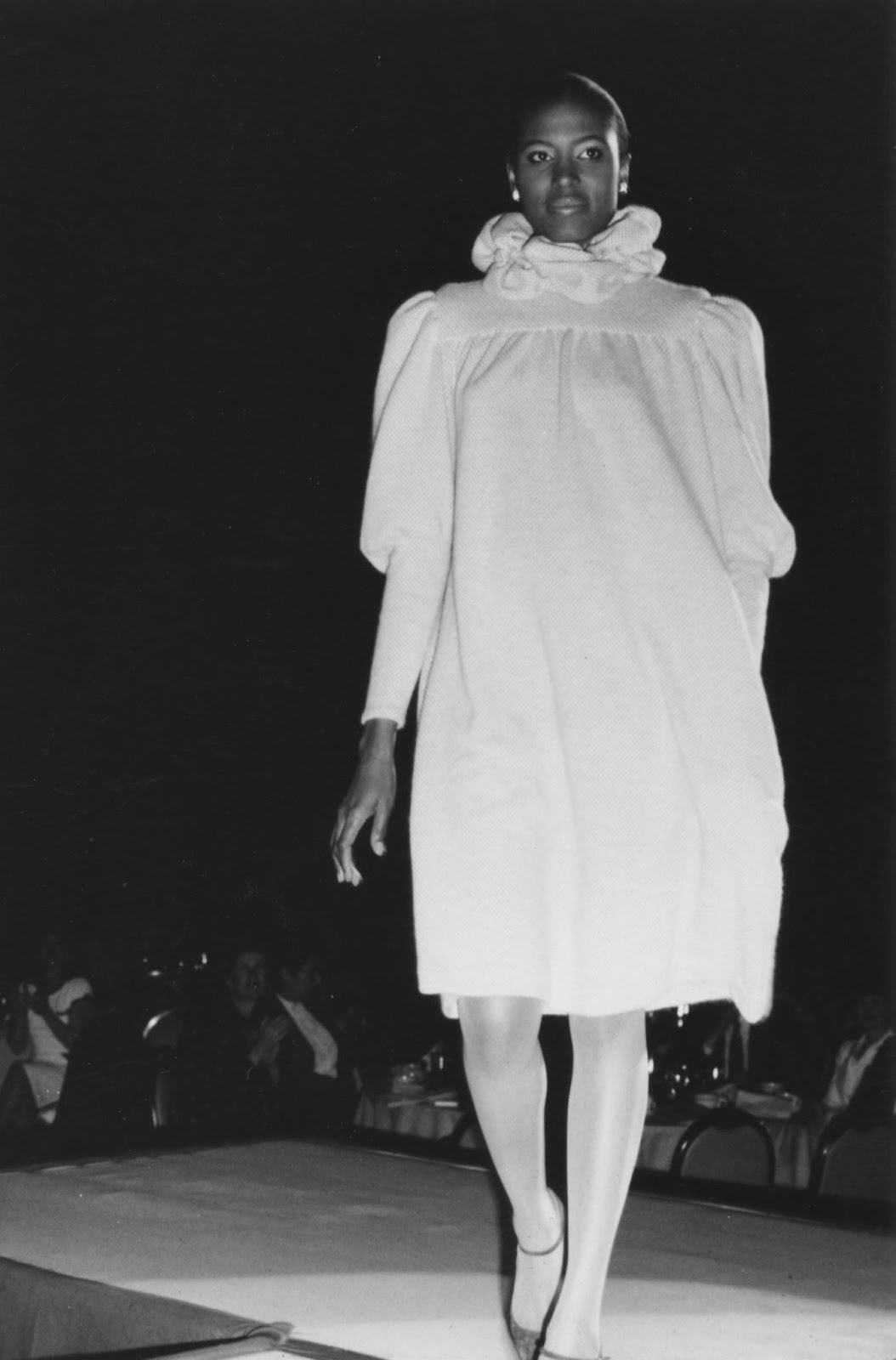 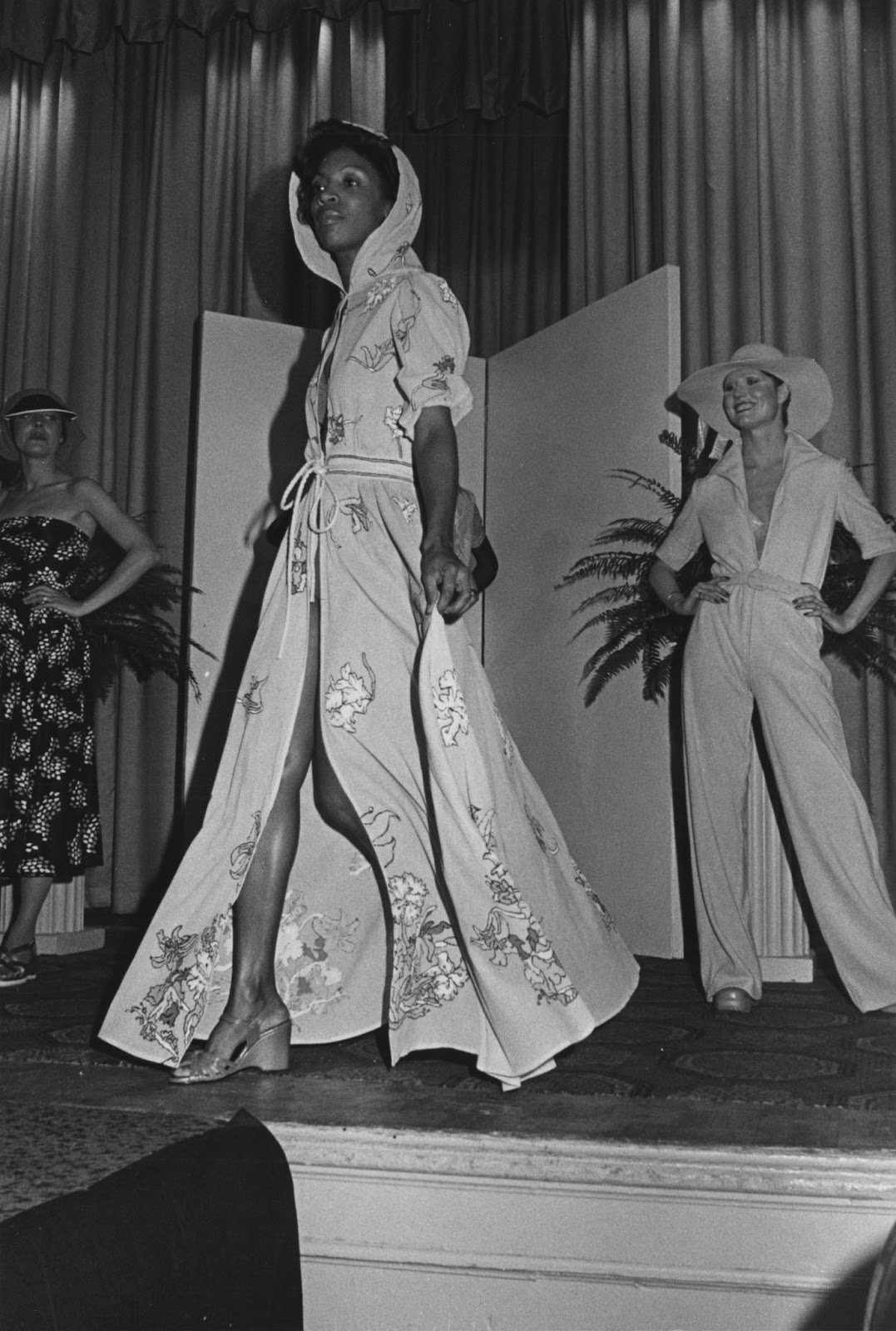 Students walking the runway, likely at the Pratt Fashion Show, hosted by the Fashion Merchandising program, circa 1980s.

Photos from the Alumni Fashion Show give us insight into the production of fashion shows at Pratt, which became grander and more involved events in the 1960s and 1970s. Though Pratt Fashion Shows in the early 20th century were prominent community events with large attendance numbers, they were relatively minimal affairs and often being held on the Pratt campus. However, after World War II, the shows were increasingly held at upscale theaters and venues in Manhattan, such as the Hotel Roosevelt, the Vivian Beaumont Theater, and the Empire State Building. Food Science students, also a part of the School of Continuing and Professional Studies, typically prepared hors d’oeuvres for audience members, and technical crews coordinated backdrops, stage lighting, and music. Awards and scholarships were often announced at the end of the program. Students also had the opportunity to work directly within the fashion industry when preparing for fashion shows by sourcing fabrics, accessories, shoes, and hair and makeup services from various brands, stores, and designers. Additionally, notable fashion critics and industry members were often in attendance, such as models Iman and Grace Jones or designer Issey Miyake, who are pictured below. 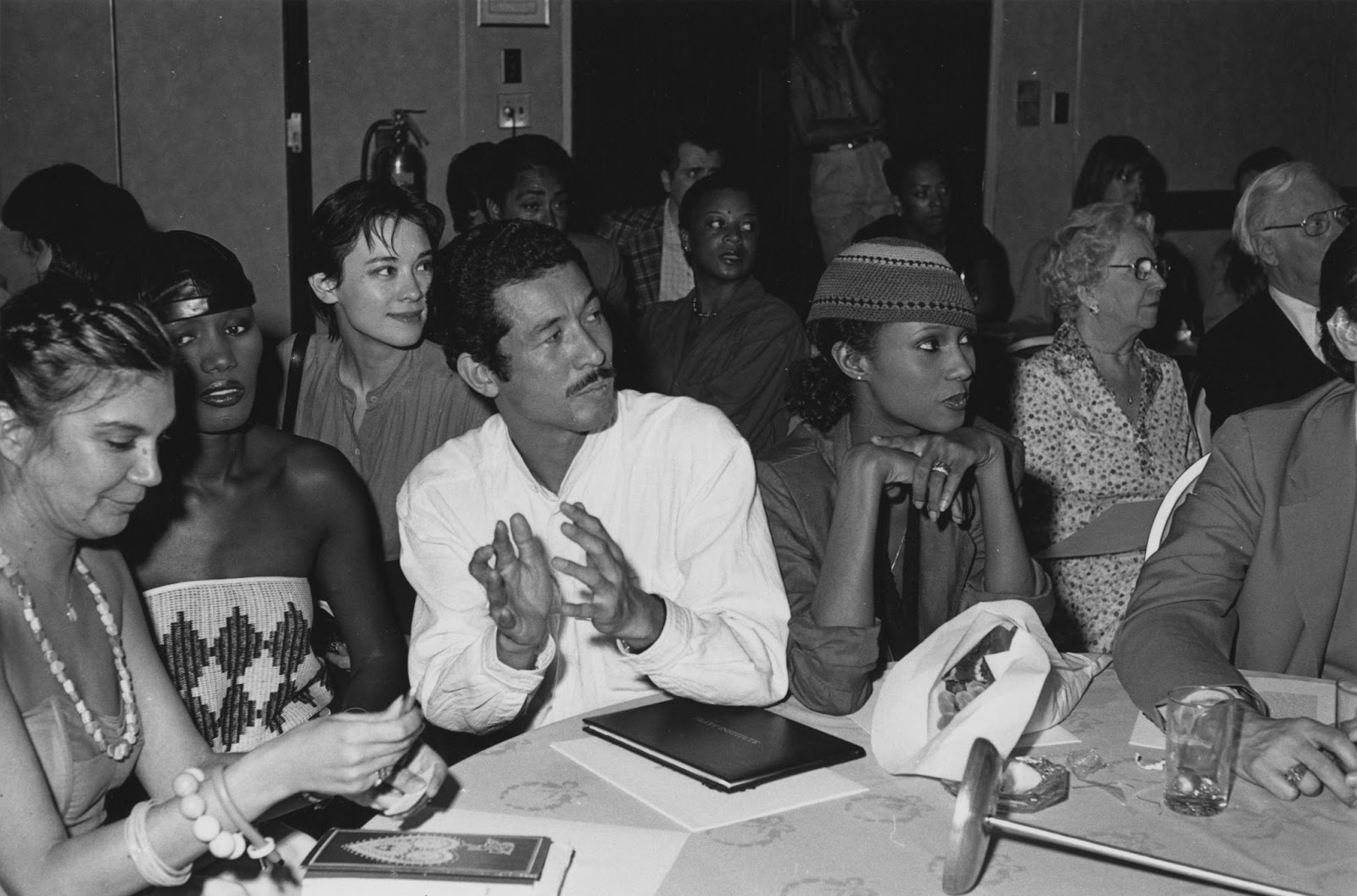 This year the Pratt Fashion Department will hold the 121st Annual Fashion Show, with designs by graduating seniors on display for their friends, family, professors, as well as industry professionals to view. In the past several years, Pratt student designers have been featured in notable publications such as Vogue, Instyle, The New York Times, and The Cut for their work in the annual fashion show. Though popular fashion trends have come and gone in the past 121 years, the history of fashion shows at Pratt does prove the constant creative ability and technical skill of Pratt fashion students in producing unique, artistic, and professional work.

A selection of fashion show items from the Pratt Institute Archives will be on exhibit on the Library's third floor throughout the Spring 2022 semester.