An Inaugural Address: DEI Work at the Pratt Institute Libraries

Diversity, equity, inclusion OH MY! If you got my nod to one of the best movies of the last century, kudos to you. If not, that line is a variation of an iconic line uttered in The Wizard of Oz. Diversity, equity, and inclusion has had a big impact on me since I first started my studies at Pratt. My name is Victor Collymore-Bey and I am the Graduate Assistant for the Diversity, Equity, and Inclusion Task Force at the Pratt Institute Libraries. Over my two years spent in this position, I have seen library staff and personnel use this platform to improve library policy and evolve the libraries’ collection to reflect the community at Pratt. The task force meets once a month during the academic year and consists of representatives from across the Library and the campus, including Saundra Hampton, Associate Director of the Office for International Affairs. As the graduate assistant, I look back on my time with the task force and take pride in the work that I have done in tandem with the board's co-chairs, Holly Wilson  and Johanna Bauman, two amazing librarians who have taught me so much and lent a guiding hand more than once. From diversifying the catalog collection to include more Black, Brown, and POC material, to format changes on library resource guides such as our Black History and Black Lives Matter guides, this task force is more than just talk. I’ve learned so much about what it takes to systematically change libraries to be more inclusive of all patrons.

In this position, I have been working to update and restructure the libraries’ Research Guides, or as many like to call them, Libguides. These guides are created with the intention of sharing library resources to educate and increase awareness of social, economical, and political topics. With input from the task force, I created the Free Resource libguide to promote and raise awareness of free goodies and services that Pratt and Pratt Institute Libraries offer to its community. This research guide also highlights the resources of New York City public libraries and other free/reduced resources for NY residents. The DEI Task Force is now partnering with the Center for Equity and Inclusion at Pratt to share the Library’s platform in order to enhance the Center’s resource guides in support of their DEI Allies Training. The goal is to create more robust resource guides with updated information that is easier to navigate from a user’s standpoint. 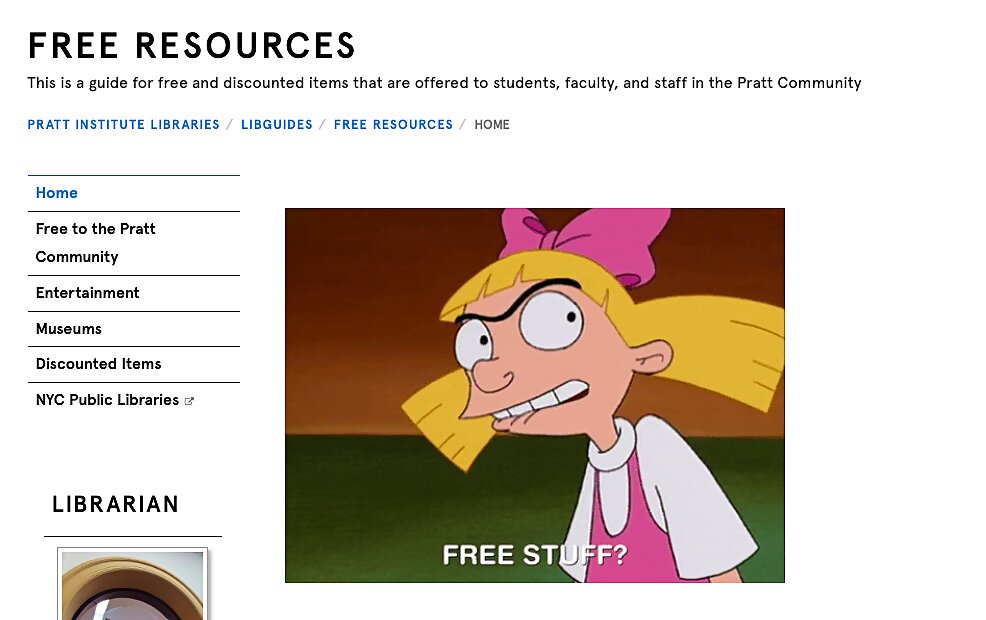 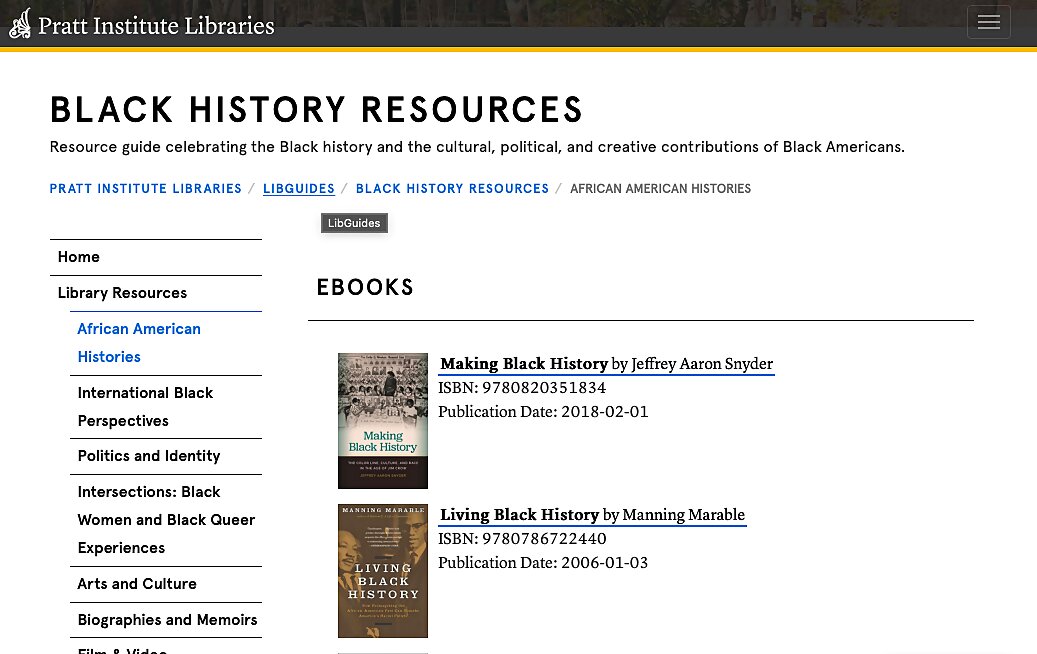 Screenshots of the Free Resources and Black History Resource guides. 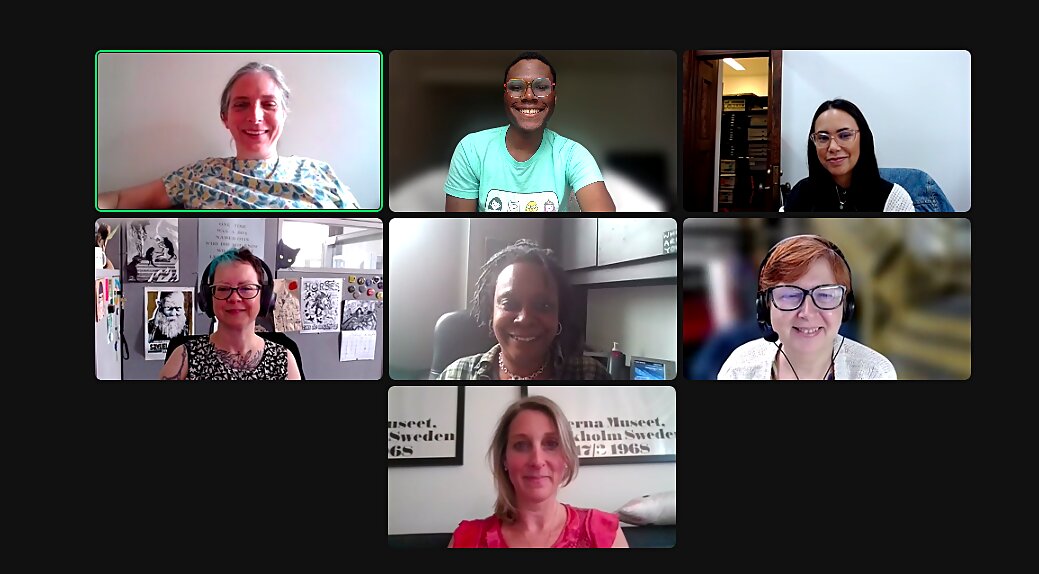 Starting this academic year, the DEI Task Force began planning and hosting conversations twice a semester for all library staff to discuss ideas, give feedback, and address concerns around selected DEI topics. Typically a video or podcast and related articles are selected as the focus of these discussions. These conversations act as a framework for recognizing biases that the Libraries’ staff should be aware of and should be actively working to change. Most of these resources come from library information professionals, organizations, or other academic institutions. I had the pleasure of moderating one of these discussions, on the topic of “Good Trouble” and how libraries can improve their community relations by first changing from within. Other discussions have included: workplace culture and how to hire and retain diverse applicants; and the role that harmful language can play in library catalogs by watching the film Change the Subject.

Harmful Language in the Library Catalog

The DEI Task Force isn’t all bark and no bite. One outcome of the e discussion groups was an initiative by task force members Melissa Brown, Cristina Fontánez Rodríguez, and Cindy Wolff to develop a harmful language statement and process for addressing outdated and racist subject terms in the library catalog. The Pratt Institute Libraries uses the Library of Congress Subject Headings (LCSH), which can include harmful language to describe people, identities, and cultures.  Terms like “illegal alien” have been used in the past to describe “undocumented immigrants”, which can be harmful to those belonging to that community. While that term has since been replaced with the terms “non citizens” and “illegal immigration,” there are still many problematic terms that may need to be addressed locally. This harmful language statement is a way for the library to acknowledge the stereotypical and harmful verbiage of subject terms that are used to skew a community’s identity.

Back in 2020, the task force wanted to hear directly from students on how the library can better serve the Pratt community with its resources and services. The task force sent out a Survey followed by a Focus Group of international and domestic students. The anonymous survey was open for 2-3 weeks. Once the survey was concluded, and the responses discussed, the task force then set out planning a focus group session for international students. The focus group allowed these international students to give their honest feedback and make suggestions about how to improve the library. Some great ideas that were brought up were about the physical space students can occupy within the library, difficulties in finding databases/research guides, and clarifying permissions that the library has on digitizing material. There were also great suggestions, such as making resources in the library more visual rather than all text. 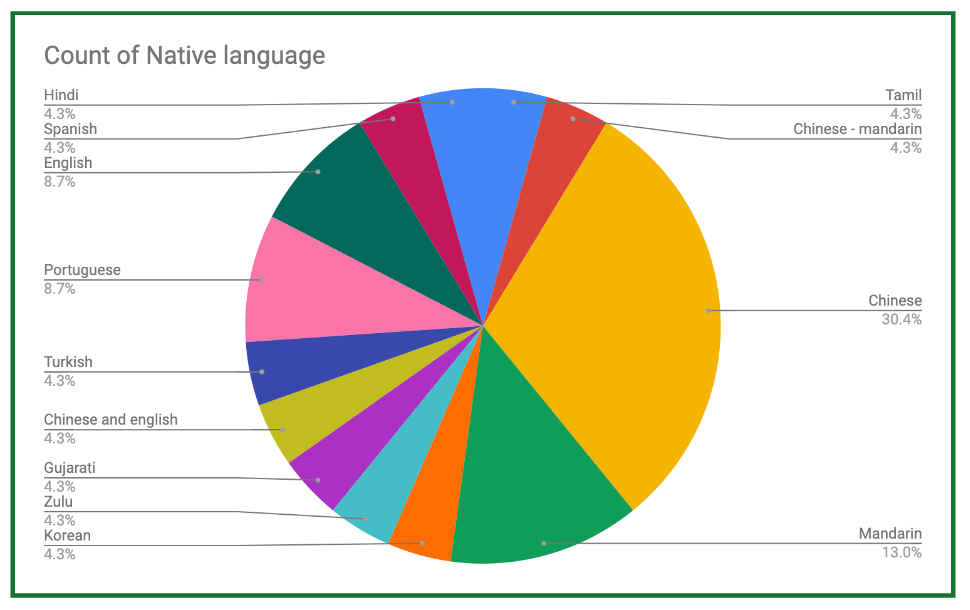 Breakdown of the International Students Survey participants by native language.

The DEI Task Force is responsible for some amazing changes taking place at the Pratt Institute Libraries. Although it is only 2 years old, the task force has created a safe space for dialogue around uncomfortable subjects, has sought out student feedback, and is actively working to change harmful language in the library’s catalog. The one key lesson that I have learned in this position is that everything happens with a conversation and that you have to be willing to not just speak, but to listen as well. Change starts with one person, one voice, one idea. I’ve seen it happen on this task force, where one idea spirals into many, until a change has occurred. While there is still a lot of work to be done, I am certain that this task force and those committed to DEI can do the work of making libraries inclusive for all.